“Before I formed you in the womb I knew you…” Jeremiah 1:5

Identity; is it individual choice or God’s decree, decided long before a child is conceived? So much of today’s news revolves around the right of self-determination: the ability to decide whether one is male or female, whether one is attracted to the same sex or the opposite sex, or any combination one chooses. Belief in absolute truth is a rare thing in today’s society.

At the same time; depression, suicide, self-harm, and anxiety disorders are at an all-time high. People cry out for answers, lost and confused in a world that says there are no borders and no rules. At the center of every life is a question of who you are and why you exist, what purpose is there to each individual life?

The Identity We Were Born For

To discover who we were meant to be, let’s go back to the beginning. In the first book of the Bible, Genesis 1:27 says, “So God created mankind in his own image, in the image of God he created them; male and female he created them.” Man and woman made in the image of God, possessing a divine nature able to realize the plans and purposes of God, and capable of a love relationship with him. God gave them all the seed-bearing plants and trees as food and dominion over all creation.

“God saw all that he had made, and it was very good. And there was evening, and there was morning—the sixth day.” (Genesis 1:31) No improvements or alterations needed. Human beings were to derive their identity from God himself.

In Genesis 3, while Eve was exploring the garden, she encountered the serpent. This being, described in various translations as crafty, shrewd, cunning, and wily, would change the direction of mankind forever.

The serpent, Satan, planted doubt in Eve’s mind about what God said. His suggestions caused Eve to desire to be something other than what God created her to be. Satan drew Eve’s attention to some delectable-looking fruit on the one tree God said they could not eat from and suggested that what God said wasn’t the whole truth. Eve was deceived.

You see, God desires obedience. People had to want God more than they wanted to fulfill temporal 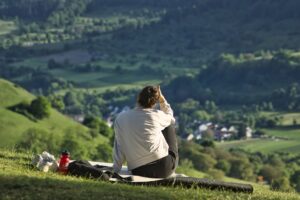 desires. And Eve failed. She ate the fruit and so did Adam.

To allow man to remain immortal but forever trapped in sin, separated from God, and powerless to change would be cruel. Because God is just and merciful, he had to punish sin. So, he sacrificed an animal in atonement for their sin, clothed Adam and Eve in the skin, and sent them out of the garden. Rebellion against God changed everything. But God provided a way for man to come back into communion with him, to regain their true identity.

Since the Fall, man has searched for his identity in all the wrong places, even when God sent his own son to show the way. 2 Corinthians 4:4 says, “the god of this age has blinded the minds of unbelievers, so that they cannot see the light of the gospel that displays the glory of Christ, who is the image of God.” Satan works overtime to prevent us from receiving the forgiveness of sins and eternal life that God offers.

When our son was little, he asked why Adam and Eve had to sin and mess everything up. I answered that if they hadn’t sinned, someone else would have. It’s man’s nature to go his own way. All of us believe the same lie Eve did. We believe we can determine our own identity, apart from God, apart from Jesus Christ. We want to live our way, because, of course, that worked out so well for Eve. Part of the identity of each and every one of is that we are sinners.

Man has sought his own way from the beginning, by setting up idols and worshiping them as gods. People have decided that rather than the marriage relationship God ordained between a man and woman, any kind of sex should be okay, and hey, why not turn men into women, and women into men. Like the old tale of the Emperor’s New Clothes, everyone thinks they have to go along with the lie.

Identity has become so obscured that people think it can change with every whim and fad that comes along. Psalm 139:13-16 tells us, “For you created my inmost being; you knit me together in my mother’s womb. I praise you because I am fearfully and wonderfully made…My frame was not hidden from you when I was made in the secret place, when I was woven together in the depths of the earth. Your eyes saw my unformed body…” Doesn’t it seem right that the one who knit us together should be able to decide who we are?

Before our mothers conceived us, God knew who and what each of us were to be. And he’s not happy with those who take issue with his creation. Take a look at Isaiah 45:9: “‘What sorrow awaits those who argue with their Creator. Does a clay pot argue with its maker? Does the clay dispute with the one who shapes it, saying, ‘Stop, you’re doing it wrong!’ Does the pot exclaim, ‘How clumsy can you be?’” (NLT) Our identity is a sacred thing, decided by God.

There is only one way to change who we are, and that is through the gospel of Jesus Christ, who told us, “Very truly I tell you, no one can see the kingdom of God unless they are born again.” (John 3:3) Once someone is born into new life in Christ, life has infinite possibilities. 2 Corinthians explains, “Therefore, if anyone is in Christ, he is a new creation. The old has passed away; behold, the new has come.” And Galatians 4:7 tells us, “So you are no longer a slave, but a son, and if a son, then an heir through God.” Children and heirs of the living God! Who could ask for a more exciting identity?

Unlike the lawlessness, violence, hatred, sexual and gender-identity confusion rampant in our world today God invites believers to discover what he wants to do with their lives. “For we are his workmanship, created in Christ Jesus for good works, which God prepared beforehand, that we should walk in them.” (Ephesians 2:10)

In Jesus Christ, it is possible to discover the truth of who and what we were created to be. We receive the glorious gift of a purpose planned by our Creator. Jesus removes our doubts and confusion. He sets us free from sin and the lies of Satan. No more can the enemy confuse us by asking, “Did God really say?” (Genesis 3:1)

God loves us. John 3:16 tells us, “For God so loved the world that he gave his one and only Son, that whoever believes in him shall not perish but have eternal life.”

God chose. us. Acts 22:14 says, “‘The God of our ancestors has chosen you to know his will and to see the Righteous One and to hear words from his mouth.’”

God forgives us. Acts 10:43 explains, “‘everyone who believes in him receives forgiveness of sins through his name.’”

God makes us his children. Ephesians 1:5: “he predestined us for adoption to sonship through Jesus Christ, in accordance with his pleasure and will—” 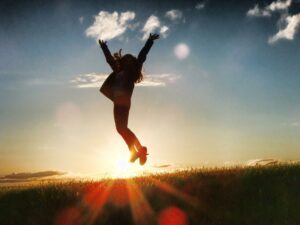 If ever you longed to be someone other than who you are, here is the opportunity to discover your true identity. Jesus Christ fulfills every need and desire, every hope and dream. If you have longed for someone to see who you are inside and love you, Jesus offers complete acceptance. “For now we see only a reflection as in a mirror; then we shall see face to face. Now I know in part; then I shall know fully, even as I am fully known.” (1 Corinthians 13:12)

Seek your true identity in Jesus Christ, and he will free you from all fears, doubts, delusions, and lies. Lay your sins at the foot of the Cross. Receive forgiveness and healing. Find your true identity in the One who made you for his very own, who lavishes you with love beyond your wildest dreams. “The Lord your God is with you, the Mighty Warrior who saves. He will take great delight in you; in his love he will no longer rebuke you, but will rejoice over you with singing.” (Zephaniah 3:17) The identity God decreed especially for you is the key to fulfillment.

Image by Ales Krivec from Pixabay

Image by Ingo Jakubke from Pixabay

Image by Shad0wfall from Pixabay