October is one of my favorite months. In the mountains of Western North Carolina, the leaves are 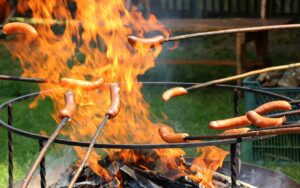 changing as days grow shorter. The air is crisper and cooler as the summer humidity finally loses its grip and dryer air moves in.  My neighbors venture from air conditioning to spend time outside.  My neighborhood is kind of a throwback to the 1950s. The town began as a mill town to house workers for the local papermill, and most of the residents are still working class.
Our kids ride scooters and bicycles in the streets, we walk dogs along the sidewalks and roast marshmallows over back yard fire pits.

This October evening seemed like any other.  A bunch of school aged children were gathered in my neighbor’s backyard playing games. I was inside washing dishes and watching them from my kitchen window. Suddenly, I heard a deafening cracking sound, like thunder, but not. I ran into the street, not even taking time to dry my hands. In horror, I realized that the huge oak tree that had graced my neighbor’s yard for decades had split down the middle and one of the huge forks had landed where moments ago the children were playing.

Somehow, all the kids scrambled to safety. If anyone had been under that limb, they would have been seriously injured or even killed. Another branch landed on the roof of the next-door house, obliterating the front porch, and doing serious damage to the structure of the house.

Experts were summoned to clear the debris. They discovered that while the tree looked healthy on the outside, long ago some small creature had burrowed into the trunk of the tree and began to consume the center. The channel also allowed water to enter and freeze and thaw winter months.  The center should have b

een filled with rock solid hardwood. But instead, a huge hollow channel was surrounded by diseased, weak wood that finally could no longer hold up the weight of the tree.

our neighborhood was rocked by the news that one of our own, a man with a responsible job and a beautiful family, had been arrested for a serious drug related crime. One morning as I sat on my porch, the Holy Spirit nudged me to look at the stump where the oak had once stood. And He reminded me that a bolt of lightning or a sudden car crash didn’t destroy that tree. It died because there was an invisible enemy, slowly eating away at the inside. The tree was dying long before it fell. The spectacular crash just revealed the truth.

In the same way, the family we all saw as normal and happy harbored an ugly little secret. No one noticed in the beginning. There were no markers we could see. Like that creature boring insidiously into the trunk of a stately oak, no one paid attention when things started to fall apart.

He had a work-related injury severe enough to require narcotic pain killers at first to numb the pain so healing could begin. But after the injury healed, the damage was already done. He developed an addiction, a physical need for more and more medication. At first, doctors were willing to prescribe the drugs. But the need grew, and medical guidelines no longer allowed free access to the medication.

The young man knew things were out of control. Soon he resorted to illegal means to obtain what his body told him he needed. He knew the risks. But he was in a desperate spiral. He gambled that he wouldn’t be caught, but he lost that gamble.

Things aren’t always as they seem.

The young man was in too deep to stop on his own, yet too embarrassed to seek help, though help would have been available. Things fell apart in a mighty crash that everyone heard and saw. Unlike the tree which did no irreparable damage, the addiction destroyed everything in its wake. He was arrested. He lost his job. And he lost his freedom for a long time. He lost the chance to see his kids grow up. His family lost a loving parent. And his neighbors lost a valued member, not to mention a degree of trust that has been slow to rebuild.

Song of Solomon warns us to catch the little foxes that spoil the vines. Fox kits are tiny and cute. They are playful and look harmless. But if you let a fox loose in your vineyard, it will gnaw on the tender shoots of the vine and eventually kill it. 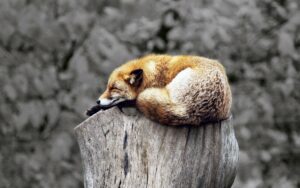 It’s easy to convince ourselves that our pet sin won’t hurt anything or anyone. No one must know. We don’t see hidden sin gnawing away at our integrity until it’s too late.  Samson played with God’s blessing on his life. But the day came that he awakened to discover that the Holy Spirit had departed from him, and he was powerless against those he once triumphed over. For us as New Testament believers, Holy Spirit won’t leave us. But His anointing and power will.

There is a solution

What’s the solution? The cure? James tells us to confess our sins to one another so that we can be healed. Secrets make us sick. They gnaw at our insides and destroy us from the inside out. They take away our peace and keep us awake at night. But when we confess our sin to God, He is faithful to forgive and restore. And when we confess to others, the power of secrecy is demolished. We see sin for what it is, the common affliction of humanity, paid for by the Cross. In relationship with God and each other, we have the power to change, the power to live from the inside out.

I pray for my neighbor and his family. I pray that he won’t grow bitter in this time of forced absence, that he will have those who help him defeat the enemy that destroyed everything had worked for. I pray that God will give him a second chance. I pray for his family to have what they need. For his kids to remember the good times. I pray for restoration because I serve a God who can deliver, restore, and redeem. And I pray for God to turn that spotlight on my heart, to show me the places I am vulnerable. Every time I see that oak stump, I remember that no one is invincible. Especially me. 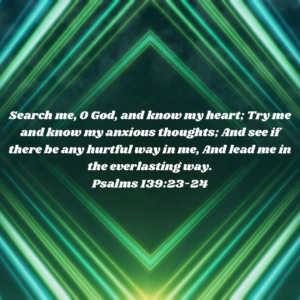