With three boys in grade school and one still in diapers, it was a daunting task to make the nine-hour trip to be with our families on Christmas Eve and Christmas morning—traditions we had enjoyed and counted on since we’d moved away from “home”. Christmas meant family, reading the story of Jesus’ birth from the second chapter in Luke, a visit from Santa, roast turkey, my mom’s cornbread dressing, playing games, and snacking on Chex mix while we worked jigsaw puzzles.

We loved it and so did our kids, but the logistics were getting tougher each year, and the year we had to figure out how to disguise the air hockey game in our vehicle, my husband said, “That’s it. We’re having Christmas here next year.”

I had to agree—it was time to make our own family traditions. We would have a candlelight dinner on Christmas Eve followed by reading the Christmas story in Luke and opening family gifts. Christmas morning was covered with the Santa frenzy. But what about the turkey dinner and all the trimmings? Shouldn’t we be adding leaves to the table and inviting people in?

My friend Shari and her family would be perfect. They usually had Christmas at home and lived right across the street. We could prepare the meal together and eat at our house.

Shari agreed right away and said, “We ought to ask old Tom. He’ll probably be alone this year.”

“Does he have family?”

I put his name on the list, and since we exchanged small gifts with Shari and her family, I picked up a pair of warm gloves for old Tom. And told the boys he was coming.

“Isn’t he that old guy at Cristin’s church?” one of the boys asked. He wrinkled his nose. He didn’t have to say any more. I knew what he was thinking.

Old Tom was dissheveled. Always in need of a shave. And a bath. And clean clothes. 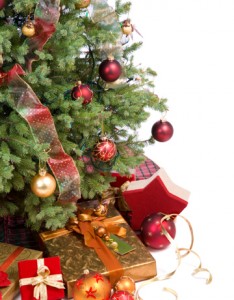 A familiar presence in the community, he always sat on the back row when area churches got together for special events and shuffled into the little country school for the kids’ programs. He nodded at those he knew, but he never had much to say. And we knew very little about him. That he would be alone at Christmas was enough.

He wore work overalls to dinner and thanked me for inviting him. I shook his gnarled, rough hand and welcomed him. After dinner, old Tom sat on a hard back chair even though we offered him a better seat. His eyes lit up as the kids opened their gifts, and a few times I caught him chuckling.

I had one of our boys take Tom his gift. A clouded look passed over Tom’s face as he took it and said, “For me?” As he fumbled with the wrapping paper, his nose ran, and when he looked up, his eyes glistened with tears.

A smile broke out. “Just what I need, but I sure didn’t expect a present.”

He thanked us again and again, and before he left, he invited us to his place to get some pecans. “They’re small, but they have a paper shell that’s easy to crack.”

A few days later, a sunny day in January, we took Tom up on his offer. He had a few acres with a couple of horses and a house trailer sitting in the middle of it. His black and white dog took up with the boys right away, and Tom showed us the pecans. No longer a stranger, Tom talked about his horses, contentment on his face as he watched the kids play. He wasn’t destitute or even needy. He could easily have bought a hundred pair of gloves. But having means to buy doesn’t mean much when you’re alone.

Having old Tom for Christmas was good for all of us. The boys learned that Christmas is not always about things, but about opening our hearts to new possibilities. And I learned that new traditions can be just as meaningful as the time-honored ones. That Christmas, we all made a new friend, and once in a while, our boys—who are now grown and have families of their own—will mention old Tom. We reminisce a bit, our lives richer because he shared our table and a small sliver of time in our lives.

Old Tom celebrates Christmas in heaven now, but as your Christmas approaches, maybe there’s someone in your neighborhood who is waiting for an invitation to dinner. No one should have to be alone at Christmas. Opening your arms can change your life as you celebrate the Christ child, the one whose arms are always open. The one who makes all things new. Friends. Traditions. Life everlasting. 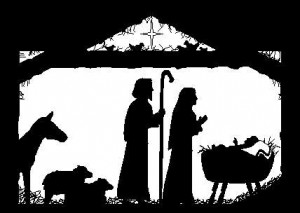 For unto you is born this day in the city of David a Saviour, which is Christ the Lord.

And this shall be a sign unto you; Ye shall find the babe wrapped in swaddling clothes, lying in a manger.

And suddenly there was with the angel a multitude of the heavenly host praising God, and saying,

Glory to God in the highest, and on earth peace, good will toward men.

May the good news of Christmas bless you and yours this holy season!