“It doesn’t have to make sense; it has to make faith.”

I was in a small group discussion where one of the ladies was relaying a conversation she had with a pastor. As someone who likes to make sense of everything, I was struck by this point. Sometimes things would be easier to endure if I could just understand it all! 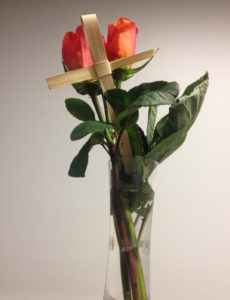 As we enter the Christmas season, it seems a perfect time to reflect on this idea. Christmas itself may be one of the ultimate occasions that was given to us not to make sense, but to make faith. John 3:16 tells us that God loved the world so much that He gave his only Son for us, first in the form of a helpless baby, then as a minister to the people, and finally as a sacrifice on Calvary’s hill.

As far as religions go, it doesn’t make a lot of sense.

But the reason, John 3:16 continues, is so that anyone who believes in Jesus will have eternal life. Not understanding, but faith.

One of my favorite analogies for the logic behind the incarnation is in the story of the Christmas ducks that Paul Harvey relayed. (It’s worth hearing if you’ve never heard it.) It offers a sliver of “why” in a story that on its surface is incomprehensible. Despite these glimpses of understanding, the fullness of God will always escape our comprehension.

I think of Mary, of whom the Bible says several times after Jesus’ birth that she treasured all that was happening and pondered it in her heart (Luke 2). Even though there is bewilderment, I read a sense of serenity in these words, perhaps harkening back to her reply to the angel Gabriel: “I am the Lord’s servant, may it be to me as you have said.”

I have heard these words read many times with the emphasis on Mary’s subservience and willingness to go forward with God’s plan. I also see something beyond simple submission. I see the trust that God will take care of her whatever is to come. She is not just any servant. “I am the Lord’s servant,” she said.

No amount of pondering was going to make sense of all Mary was about to witness. But as God’s plan unfolded just as was foretold, there was the opportunity for faith.

We have the same opportunity to allow God’s Spirit to work within us. God can use whatever we are facing to grow our faith. And our faith, as Peter wrote, is of greater worth than gold.

Our God is not hidden. He made himself known on an unexpected Christmas morning, and He continues to make Himself known to us through the scriptures and through His Spirit. Regardless of whether this Christmas is a time of joy or a season of struggle, take a moment to look through your circumstances and see God’s presence in your life.

He has come, and He will continue to come so that we may have faith to believe in Him.

Janet Beagle, Ph.D. serves as director of graduate programs for Purdue University’s College of Engineering and is a writer, a Bible study teacher, and a student of God’s word. In her spare time, she likes to eat other people’s cooking and hike with her two- and four-footed friends. Read more of Janet’s Christian reflections at www.mustardpatch.org