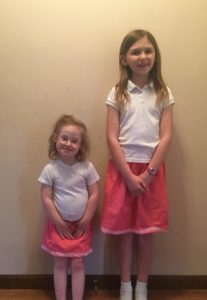 Working in a fabric shop, I have the blessing of chatting with many who minister through sewing. Some make large quantities of pillowcases from novelty fabrics that will appeal to children who must endure the pain of chronic illness. Others make quilts for babies of unwed mothers. These seamstresses use their time and talents to serve others, many of whom they will never meet. Although their ministries are important, and even impressive, the one who has touched my heart the most is the little skirt maker.

It started in a children’s sewing class.

The goal for each girl was to make a skirt for herself and her American girl doll.

Some would have said that it was a lofty goal for eight and nine year olds, but the little skirt maker was not daunted by the task. In fact, she had a plan of service that went beyond sewing for her own use or pleasure. Her little sister, understandably envious of her sister’s activity, has Down Syndrome, and the little skirt maker’s heart reached out to include her.

The sewing class went smoothly. Twelve or so girls worked busily at their machines. Soon, the skirts were cut, stitched, and gathered with elastic at the waist. A trim hem completed each project, but it did not complete the mission of the little skirt maker.

Anxious to use her new skill to serve others, she began to work at home — measuring, cutting, and stitching a new garment. This time, the skirt was not for herself or her doll.

This time the garment was for her younger sister.

Soon, the girls both had skirts, identical in fabric and trim.

What a lovely example of Jesus’ call to us to serve others! What a wonderful way to step unafraid to use a new skill to minister!

Someday, when I grow up, I hope to serve without question or reservation like the little skirt maker.

Carol McAdams Moore writes for children and youth in the general and Christian markets. Her debut tween devos: Dare U 2 Open This Book – draw it, write it, dare 2 live it – 90 devotions and Just Sayin’ – write ‘em, draw ‘em, hide ‘em in your heart – 90 devotions released in September 2014.