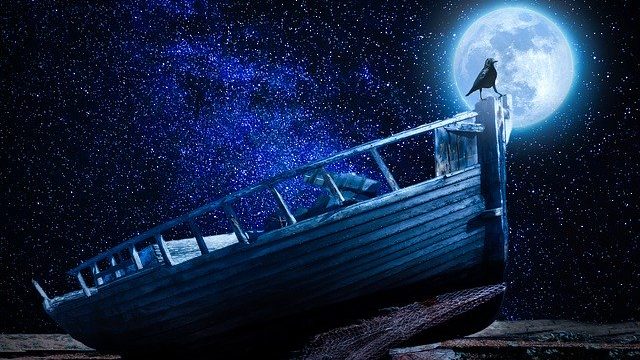 Early in the morning, I stand on the shore of Tiberias. In the towns and villages around this lake I turned water into wine, healed the son of a Roman centurion, helped my disciples catch so many fish their net began to rip, cast out demons, and healed Simon Peter’s mother-in-law. I fed thousands with but a few loaves and fish. I taught thousands about the true character of my Father, their God. I healed many with various diseases, even leprosy. I called these men to become fishers of me.

Look at them: clinging to the past. Back at work with their old ways.

This morning my disciples did not realize that it is me watching them work. They have returned to their their comfortable calling, that old job that requires little thought and even less risk.

I call to them, “Friends, haven’t you any fish?”

“Throw your net on the right side of the boat and you will find some.”

Though they are not far from shore, only about a hundred yards, I can sense from Peter’s tone and body language that he is irritated. Peter: always quick to act, quick to judge, and quick to speak. And yet so slow to believe my words and all spoken about me by the prophets.

Though these men have the strength of two, they are unable to haul in the large number of fish.

As soon as Simon Peter hears John say, “It is the Lord!” he wraps his outer garment around him and jumps in. The other disciples follow in the boat, towing the net full of fish.

When they land, they find me seated by a fire of burning coals with fish grilling, and bread warming. Though I have all I need, for my Father’s grace is sufficient, I invite them to bring their catch. “Add yours to mine.”

Simon Peter–first out, first in–climbs into the boat and drags the net ashore. It is full of large fish, 153. Yet even with so many the net is not torn.