My family visited Washington on the Brazos, Texas a while back. It is known as the Birthplace of Texas. It was here the Texas Declaration of Independence was signed.

At the time, Texas belonged to Mexico. However, the Texians decided they could no longer live under the rule of the pompous, tyrannical, ego maniacal Antonio López de Santa Anna. So, they joined together and took the necessary steps to achieve freedom from tyranny.

As we sat in the Texas Independence Hall, we listened to the docent explain about the signing of the 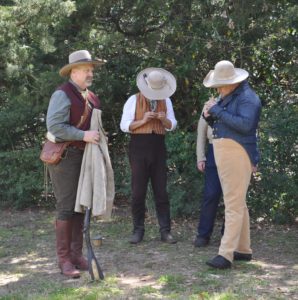 He said the signers disliked each other yet put their differences aside to fight together for a common goal: freedom from tyranny.

This reminds me of another group of men who set their differences aside and worked together to fight for one goal. The twelve disciples of Christ.

Let’s look at the twelve men Jesus chose. Among the original twelve disciples we have Andrew, Peter, James, and John, all who were fishermen. Peter was the impetuous one. John, the one whom Jesus loved. James was called a Son of Thunder. Andrew brought his friend Philip to meet Jesus. Philip brought his friend Nathaniel.

Matthew was a hated tax collector for the Romans. The Jews considered Matthew a social outcast. Simon the Zealot was an enthusiastic Jewish patriot. Some might call him a far-left radical. Thomas became known as a doubter. John called Judas a greedy thief, traitor, betrayer, and a devil used by Satan.

Lesser-known Thaddeus, Bartholomew, and James the son of Alphaeus round out the twelve.

After Judas hung himself, the disciples chose Matthias to replace him. As Saul/Paul, a leader in the Jewish religion who persecuted Christians, walked on the road to Damascus, Jesus chose him.

Some disciples worked the front lines with name recognition. Many worked behind the scenes in obscurity. Several were at opposite ends of the political spectrum. Among these Christ followers, there were moments of greatness, followed by moments of absolute failure. There was also failure before greatness.

Just as Jesus used each disciples’ abilities, strengths, frailties, and failures for his purposes, he does the same with us today.

He took these individuals, melded them together, and used their strengths and weaknesses to form a more complete, functioning unit to tell others about him.

As we spread the Gospel of Jesus, we may be the one speaking in front of the crowd.

We may be the one organizing the group.

Perhaps, we are the one offering support and encouragement from the sidelines.

We may have a hot temper, be submissive, be politically outspoken, have a head for numbers, or be willing to work wherever we’re told.

It really doesn’t matter, as long as we are willing to set aside our personal agendas and preferences, come alongside the diverse group of individuals Christ has chosen, and work together to accomplish the work he sets before us.

Just as was true with the founding fathers of Texas and the twelve disciples of Christ, let’s not allow our differences to keep us from joining hands.

Instead, let’s put our differences aside and fight together so the world may know the freedom from tyranny that can only be found in the Good News of our Savior, Jesus Christ the Lord.

How are you coming alongside other Christ followers?