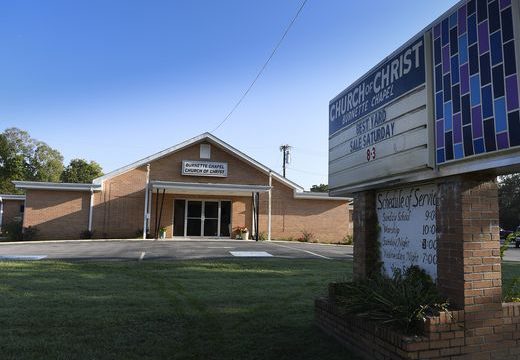 You may have read the headlines a few weeks ago. A lone gunman, Emmanuel Samson, age 25, sits in a parked car with engine running for 20 minutes, waiting for church services to let out.

He was no stranger to this church. He attended for several months, just a few years before. So he knew the layout, this parking lot, these people. They welcomed him with open arms, taking the time to learn who he was and what brought him their way.

But everything about him had changed since they last saw him. His countenance, the size of his muscles, his smile, his eyes.

Burnette Chapel is a small church family that spans multiple generations and a diverse population. When this family was ambushed shortly after 11:00 that morning, one member lay dead in the parking lot and seven others wounded inside the church auditorium. The gunman accidentally shot himself during a struggle with an usher who charged at him to halt the attack.

This same usher, a 22-year-old who had grown up at this church, retrieved his own gun from his car and held the attacker on the ground until police arrived.

This assault was supposed to have been much worse, as there were additional weapons waiting in the attacker’s vehicle.

In a back classroom, a Sunday School teacher hid the children and set herself in a rocking chair, facing the door, prepared for anything. The minister, Joey Spann, was shot in the chest when he ran toward the attacker, even after his wife lay on the floor with a bullet wound of her own.

Though this is not my home church, I have attended services there and know these people well. This church family is made up of our family and friends, and in listening to them describe all that happened, grieving the loss of one of their own, how the remaining victims are healing, repairing their building to make it feel safe again and cleaning up a massive crime scene, I can honestly say that one thing that grieves them most is the wondering about the heart of their attacker, Emanuel Samson.

Because he was once one of them, and they looked him in the eyes and told him how much Jesus loves him.

My guess is if they ever get the chance to see him again, they would remind him that Jesus still loves him.

You asked us to be the body of Christ.

His hands, his feet, his arms, and his eyes.

You asked us to open our doors and our minds

To the hurt and rejected, so You they might find.

You warned they might hate us, but said to choose love

And promised to fill us with more than enough.

You forgive all, which the world cannot understand.

And still, You allow us to be the heart of Your plan.

You bring searching hearts to the foot of Your cross.

You ask us to show them they don’t have to be lost.

You asked us to be the Body of Christ.

Your church with doors open, and arms open wide.

But the Body of Christ, Your church and Your bride

Has been attacked and defiled; pierced in our side.

The Body of Christ is bleeding and broken.

Scattered and beaten, stunned and awoken.

Betrayed by a loved one once held in our arms.

Who sought to destroy us; the ultimate harm.

Your halls now echo with our blood and our cries.

Our terror, our fears, our sobs and good-byes.

But these are Your grounds, humble and holy.

They tell of Your love, they reveal Your true story.

Burnette Chapel Church may be bleeding and broken.

But kneeling and trusting the words You have spoken.