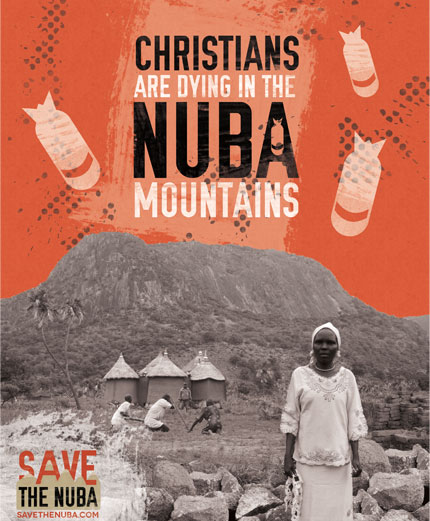 I’m late putting up my post because my days have become filled with fighting the genocide in the Nuba Mountains of Sudan.

I’m sure I’ve posted about this before, but the situation truly deserves the world’s full attention.

Did you know that satellite images show mass gravesites?

Did you know that the government is going door-to-door? If you are a Christian, if you are a black African, or if you fought for the freedom of South Sudan, they are rounding you up and carting you off in trucks.

Did you know that villages are being raided, and that often it is the elderly and toddlers who can escape fast enough? They are being found mutilated afterwards by the family.

The president of N. Sudan is an indicted war criminal. He is charged with genocide and is responsible for the atrocities that happened in Darfur. He has been very open that he is clearing out N. Sudan of non-Arab and non-Islamic elements.

The humanitarian needs of its citizens are being used as a weapon against them.

This is an emergency.

This is a situation that testifies about the moral fiber our generation. Did we know about a holocaust and do nothing?

The reason this genocide is able to continue, is because no one protests it. When we watch and say nothing, we give evil the license to continue its practices.

There was once a story told by a great Teacher. It was about a man who was beaten and lying bloody alongside a road. The fact was, no matter who helped him, they were going to have to go out of their way. They were going to have to step aside from their business, for just a moment, in order to tend to the emergency. Not many people wanted to stop and help the man.

The same Teacher taught that we are to love others as though they were ourselves.

It leaves the questions, if your country had targeted you for extermination, were systemically starving you to death as you hid, or were searching door to door in order to kill you—what would you want the world’s outcry to be?

If you’d like to add your voice to the protest of this genocide, here are three simple ways you can help:

1. Spread awareness of the situation by changing your Facebook picture to Save-the-Nuba logo. I’ve already seen people become interested because they keep seeing the picture on Facebook.

2. Sign the online Petition (www.savethenuba.com) asking President Obama for a No Fly Zone.

Please visit www.SavetheNuba.com and sign the petition. Learn what else you can do to help!