In my mind’s eye I can see him dressed in his suit with his hat and cane within reach and ready to go at a moments notice but with no plans to go anywhere. He would sit for hours reading his mail and the daily newspaper. Having reached his eighties, he was content and seemed at peace.

The mail, which would occasionally fall out of his lap as his head dropped for

a short nap, was addressed to Ret. Maj. W. H. Washington. Being a thoughtful granddaughter, I would pick up the letters for him and place them back in his lap. He was proud of his rank, as he should have been, for he was one of those who paid a price for the freedom we experience to this day.

Injured in an automobile accident while stationed in Germany during World War II, he was left for dead after being robbed while he lay unconscious on the side of the road. Once found he was rushed to the hospital where he had numerous surgeries, including having a steel plate placed in his skull, and spent months in the hospital.

While recovering in the German hospital, by providence another soldier recognized him and was able to tell the medical staff who he was since all identification was taken from him during the attack. Finally my grandmother, mother, and the other six children were given the news that he was no longer missing.

As a child I didn’t pay much attention to the name addressed on my granddaddy’s letters or think about the price that came with the title. Now as an adult I am honored and proud of him. I thank him for his service for my freedom—and the freedom that is so dear to me is the freedom to worship my Savior who paid the ultimate price.

“Greater love has no one than this, that someone lay
down his life for his friends.”
John 15:13

Retired Major William Harold Washington didn’t die that day in Germany but others did and are still dying for our freedom. May we always remember to honor each one and thank them for their service, for without them we would surely lose our right to worship The One who paid it all.
In memory of 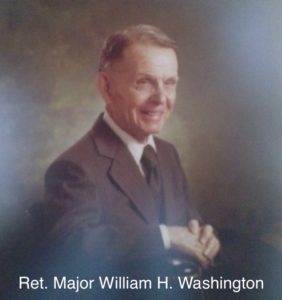