The sheer rock face rose high above the blue and purple layers of the mountain range. Morning mist blanketed the valleys below and followed the river that flowed like a ribbon rippling in the wind. I thought about my God — my Father Whom I adore — and I thought about the task before me that was so much bigger than me.

On The Wings of Eagles

I noticed on the highest shelf among the boulders and rocky crag, an eagle’s nest spread its wooden tarp of twigs, thorns, moss, and feathers. A fledgling stretched his wings, hopping from twig to twig, flapping earnestly in preparation to soar while the parents perched nearby.

Fear seemed to grip the young eagle and he plopped back into the security of the nest. 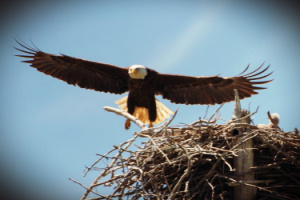 But momma knew the time to fly was now.

She nudged her baby to the edge of the nest, and with a gentle prod, pushed him into the vast domain with nothing but air to support his wings. The young bird dropped from the cliff, squawking with terrifying protest.

The father eagle swooped down beneath him with majestic wings spread wide. The fledgling rested on the strong back of its father who soared to the top of the cliff and repeated the process.

As the young bird took flight, the parents flew in small circles with their little one imitating them. As the fledgling became exhausted, the father would once again swoop beneath him to give him a resting place. The circles of flight became larger and larger, always rising towards the sun in an ascending spiral …

Always rising towards the sun in an ascending spiral. 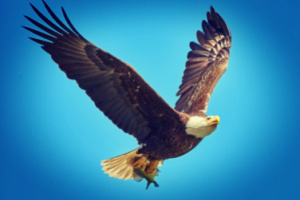 I want to believe my life reflects this same image as I learn to trust the Lord, step out of the nest with nothing but His breath to support my wings. I want to believe that, in my attempts to ascend, He swoops beneath me and allows me to rest upon His expanded wings when I become too weary or too exhausted to continue on my own.

I want to believe.

And most days I do.

But there are always those days in which I falter, when I find myself falling through the air, squawking with terrifying protest — those days when life is coming at me fast and hard, and I have no sense of control.

Ahhh. That’s it, isn’t it? The lack of control.

This begs the question: Do I believe God … or not? Do I trust God … or not? There can be no in-between — either He is Lord of my life, or He’s not. 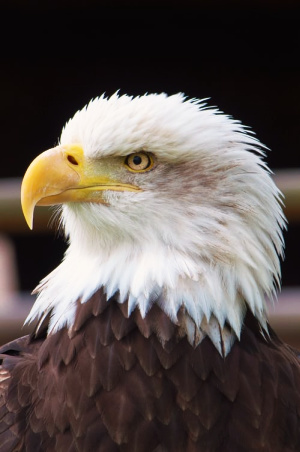 “As an eagle stirs up its nest, hovers over its young, spreading out its wings, taking them up, carrying them on its wings, so the Lord alone led Israel.” “I bore you on eagles’ wings and brought you to Myself. Now therefore, if you will indeed obey My voice and keep my covenant, then you shall be a special treasure to Me above all people; for all the earth is Mine.”~ Deuteronomy 32:11 and Exodus19:4-5

So, on those days in which I falter, when I find myself falling through the air, squawking with terrifying protest — those days when life is coming at me fast and hard, and I have no sense of control — I will remember that I am my Father’s special treasure, and He wants me to fly.

I will remember that on the heights of the wind I will soar with Him.