No discipline is enjoyable while it is happening—it’s painful!
But afterward there will be a peaceful harvest
of right living for those who are trained in this way.
Hebrews 12:11 NLT 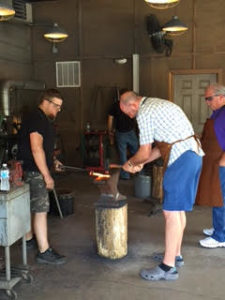 My wife and I and two other couples were on a much-needed respite in Pigeon Forge, Tennessee. My birthday approached, and unknowingly to me one of the couples wanted to give me a unique present. The husband ushered me into a local blacksmith’s shop where customers made their own knives. “Want to make one,” he asked?

I had already looked at the price of forging a knife. Too steep. Although I loved knives, I knew we couldn’t afford this adventure. “Nah, I don’t think so,” I answered.

“But my wife and I want to give it to you as a birthday present,” he said.

We donned blacksmith capes, put on safety goggles, and waited our turn. When ready for us, the blacksmith called us in front of an oven which spewed flames heated to 2,000 degrees Fahrenheit. He showed us an x he had drawn on a steel beam.

“Take this hammer,” he said. “When I say go, hit the center of the x as hard as you can until I tell you to stop.”

And for the next forty minutes, we did. His commands echoed in our ears four different times before we finished our knives which were made from old railroad stakes. He then relocated us to a vice grip. After he heated the opposite end of the stake, he placed it in the grip and told us to turn it three times with a wrench. This action completed our knives’ handles.

From here, another gentleman buffed away the rough edges of our knives and put a sharp edge on 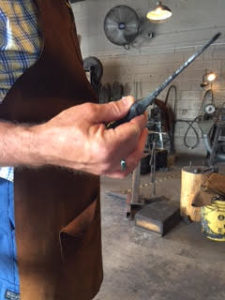 them. Topping off our adventure, the salesperson gave us a leather sheath to place our knives in.

I can’t remember a single time when my parents disciplined me that it was pleasant or that I enjoyed it. And the same goes for God’s discipline. Only later did I understand its purpose.

The railroad may have also questioned, “Is there some reason you are hitting me?” 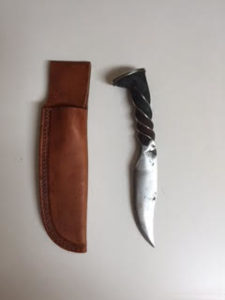 The blacksmith controlled my forging. At a certain point, he shouted, “Stop!” And God does the same. His hitting doesn’t go on forever. He brings it, controls it, and ends it. When I submit to His discipline and learn from it, the end product is beautiful—just as my knife is.

I’ve often wondered why God hits and why so hard. I knew why my parents disciplined me—though I didn’t always understand their methods. I had committed a sin or infringed upon their rules, but with God the reason isn’t always clear. He may want confession or repentance of sin—or He may simply be attempting to train me. Hitting the railroad stake, after all, had a goal: making a knife.

As autumn approaches, I know the end of the year is nearing. Thankfully, God’s forging of my life never ceases. He’s always making me into the best me I can be. All that’s required is my cooperation.