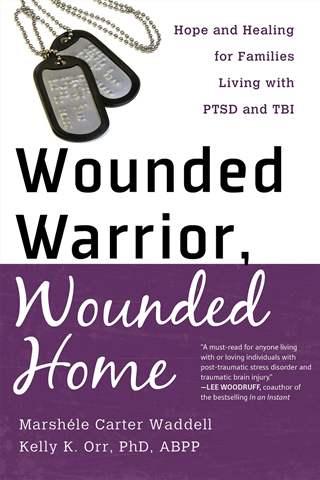 The New Normal is not a suburb in Illinois. It is where our wounded wait for loved ones to heal from the hurt they brought home from the war. Wounded Warrior, Wounded Home (Revell Books) by Marshele Carter Waddell and Kelly K Orr is a map of that territory. Mrs. Waddell suffered with scars from twenty-five years of home fires burning out the insides of her marriage to a Navy SEAL. In her flailing and wailing against God and combat deployments, she found an echo to her most solitary voice in the experiences, nightmares, and hopes of the countless casualties that make up our military families.

In her introduction she states, “The aftermath of war is the battle fought and won on the home front…When a veteran suffers Post Traumatic Stress Disorder, or Traumatic Brain Injury, every member of his or her family experiences the effects, and in many cases suffers from secondary acute stress.” The war doesn’t stop when the wounded warrior walks in the front door; it changes parameters. The war-come-home fosters a “Pestilence That Stalks in Darkness” that yields a “Pain Shattering The Dream.” Mrs. Waddell’s hope is that it can come to mean “Passing Someplace Terribly Dark” or even “Peaceable Salvation Through the Divine.”

Wounded Warrior, Wounded Home is a Christ-centered book aimed at rebuilding the lives of the 4.5 million service men and women estimated to be suffering from the frozen, permanent wartime state of mind that is combat stress related and the nearly 15 million close family members suffering from compassion fatigue. A knot of grief engulfs every life touched by the ugly dogs of war vomiting in the living room and blocks the necessary mourning of those things that will never be the same again because of the war.

It’s a tall order, made taller still by the normal world’s insistence that pain be put away, that the consequence of war be marginalized, that the heroic returning of the warrior give way to an unremarkable return to ordinary life. The role of the church in assisting the healing of surviving soldiers and their families is hard to define, because it’s hard to find.

Wounded Warrior, Wounded Home spells out in detail how readers can come across the spiritual resolution that only God can provide. Mrs. Waddell’s efforts in this regard have given birth to Hope for the Home Front.com and it’s my hope after reading this extraordinary how-to-cope-and-even-thrive manual for traumatized families, that every reader can raise a banner, a prayer, a helping heart and hand, as well as a few dollars, for the effort to rebuild God’s Army in peacetime.

*Available March 2013 at your favorite bookseller from Revell, a division of Baker Publishing Group