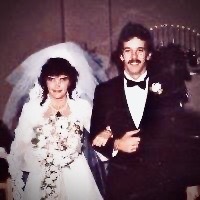 From this day forward.

Wow! Thirty-six years of marriage. How is this possible?

I think back to our vows taken on that day, heading down the aisle as the clueless kids we proved to be.

If only we’d known what we were getting ourselves into.

To have and to hold – God already knew the gifts he’d provide.

To have and to hold.

Our children, Crystal, Andrew and Malloree. Perfectly ours. Trusting us to protect and guide them, long before we knew how.

Our parents and grandparents.

To have and to hold.

For better, for worse – Turns out, these two go hand-in-hand. They occur simultaneously.

Laughter and tears. Life and death. Joy and sorrow. Fear and triumph. Confusion and clarity. Letting go and growing up. Selling it all. Starting over. Relocating.

Alone. Together. Choosing each other.

At our best and at our worst.

For richer, for poorer – We thought we needed more money.

But we were wrong.

True, we ate bologna every night, but we also lived in a basement filled with the wonder of a newborn. Our electric bill cost more than our rent. Paying off her hospital bill on her fifth birthday. Old cars going up in flames on the side of the road, with a newer one soon provided. Answering a surprise knock on the door to find groceries or an umbrella with $10 bills wrapped around the spokes.

If we had enough money, we would have missed the blessings.

Richer and poorer. All at once.

In sickness, in health – Turns out, we are truly in charge of nothing. Hospital waiting rooms provide a great place to sharpen our focus and strengthen relationships.

But I suppose it takes sickness to appreciate health.

Too many surgeries to count; yet you always came home.

Sickness and health. Both proved to be a gift.

To love and to cherish – The easiest and hardest part. Love comes easy, but ‘to cherish’ takes work. We show up for the mundane to find the terrific.

This vow also extends to our families. Had we known how soon the older generation might pass the baton, we’d have paid more attention. Soaked up their wisdom.

Trained for this legacy.

It’s ours now. The hills and valleys. Uncertain futures. The next generation.

Will they see the same level of loyalty and determination in us?

We must teach them. To love and to cherish.

As it was shown to us.

‘Til death do us part – True, we made that promise, but no one ever stops to think how our ‘happily ever after’ might end.

It won’t be easy. There will never be enough time.

How did I get chosen to walk this road with you?

How long will it last?

I’ve been given thirty-six years, so far.

If only I’d known what a story God could write with two willing hearts. Fragile, but hopeful. Doubting, yet determined.

We asked him to show us, and he did.

Like manna from Heaven; one day at a time.

I would have worried less and enjoyed it more.

I would have run with open arms to the new adventures in each new state, fully understanding that God is bigger than the state of Tennessee.

As a parent, I would bypass the trap of moving from one crisis to another. I would have ignored my feelings of failure, and trusted our kids would turn out better than we did.

Growth is messy, and the years pass quickly.

Before you know it, thirty-six years have passed.