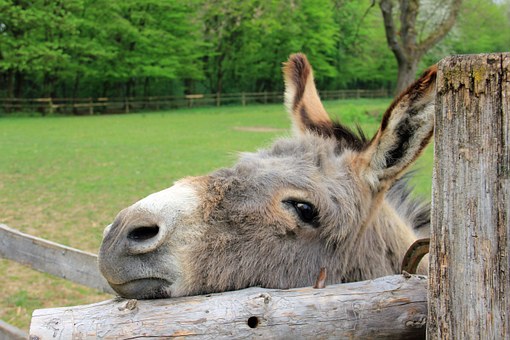 Donkeys may not appear wise in our eyes, but sometimes we humans lack wisdom as wise as a donkey.

In many instances we look to our elders for wisdom. Their experience and knowledge base is vast. Sometimes God uses the innocence and wisdom of the young to reach us. Either way, the truly wise among us will weigh the advice we receive to discern what is true wisdom, and what is not.

When I first read the story of the Prophet Balaam and his talking donkey, (Numbers 22:21-35) I was in 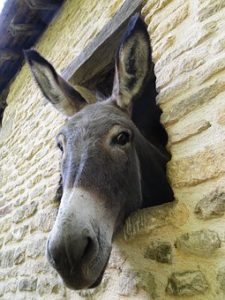 elementary school. The story made me giggle. This was around the same time Mister Ed, the talking horse, was on television. If you ever saw the show you might remember Mister Ed was a whole lot smarter than his owner, Wilbur.

It was also at that time, as the youngest member of my family, no one took what I said seriously. Perhaps you can relate to such a situation.

In the story of Balaam’s talking donkey she sees danger in front of them, and tries to avert it. (Although the Bible doesn’t give the donkey a name, I’ve named her Princess.)

God opened Princess’ eyes to something he closed Balaam’s eyes to. An avenging angel, sword in hand, stood in front of Balaam and Princess, determined to stop Balaam from his planned journey.

Every time Princess swerved to get away from the angel, Balaam beat or kicked her. Then the most wonderful thing happened. God let Princess speak! And Balaam talked right back to her as if it was nothing unusual.

Princess states the facts. She’d never led Balaam astray all the time they’d been together. So, why did he think she would do that now?

When God allowed Balaam to see what Princess protected him from, Balaam fell to his knees. I’m thinking the guy should have given Princess a hug before hitting the dirt. After all, she saved his life.

Some of us may have Balaams in our life. You know. People we’ve been around long enough for them to trust our counsel, but who, for whatever reason, think we’re a donkey without the sense enough to know what you’re talking about.

Some of us may even be Balaams. We refuse to believe another person could possibly have an ounce of wisdom to their name.

We can pray for the Holy Spirit to give us the words to say the right things to our Balaams. Just like God gave Princess. We can pray God will open their eyes and ears so they see the truth. We also need to pray God will open our eyes to see those he’s placed around us who can show us dangers we may not realize we’re stepping toward.

Do you have any Balaams in your life? Or would you have to say you lean more toward being a Balaam? Either way, God can use each of us for his purpose if we listen for the wisdom in those around us.

[bctt tweet=”Donkeys may not appear wise in our eyes, but sometimes we humans lack wisdom as wise as a donkey.” username=”inspireafire”]