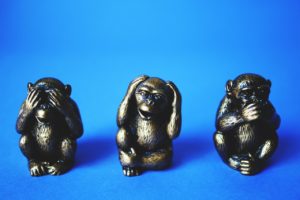 It was dinnertime, and Kasie had been fasting since morning. We arrived at the hospital as the doors opened. Nobody seemed to know which vials to use for the uncommon tests. It had been a frustrating day.

As soon as we reached home, Kasie put her swimsuit on while I waited for pizza. My phone rang. Someone from the lab said that they hadn’t drawn enough blood.

I watched Kasie as she waded into the pool, wondering how I was going to tell her that she had to go back.

“Kasie, we have to go give them more blood.” She lowered her eyes and, without complaint, climbed out of the pool.

When we arrived home for the second time that day, we ate our cold pizza and floated in the water, letting the frustration of our day sink to the bottom of the pool.

Kasie was quiet, but her frustration seemed to linger just beneath the surface. She was only twelve, but she’d been through so much — medical tests, a week in the ICU, fasting, blood draws.

Is it ever okay for Christians to curse?

That day, I told her that it was okay to curse if nobody but us heard it. As long as it was directed at Satan, the one who made it all so. 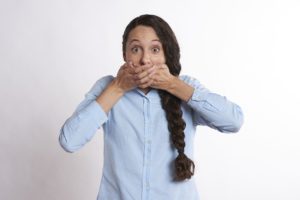 Kasie was only in middle school, but the string of expletives that came out of her mouth would have made even a hard-core rapper blush. I struggled to recall ever saying those curse words in front of her. They kept coming until her rage was exhausted.

I comforted her. But, I wondered about my new rule.  Was it okay to curse if nobody else could hear it? Doesn’t God hear it?

I looked to Scripture for instruction on cursing and didn’t find much. Ephesians 4:29 was familiar to me because I am impulsive and tend to not think before I speak. I try to remind myself of this verse before saying something that harms instead of helps.

Where does God draw the line on cursing?

Still, I wondered, what harm is there in uttering a little curse at the cause of a hijacked day, a stubbed toe, a broken heart, or a sick child? I mean, if the evil one is wreaking all this havoc in my life, why can’t I curse him? And, if I can curse him, what words can I use? Where does God draw the line?

As I usually do, I discussed my questions with my husband, who to my knowledge has never uttered a curse word.

Always look to Christ as the example to follow.

He suggested that in cases where there is an absence of specific direction in the Bible, Christians should look to Christ as their example to follow.

I’ve been reading the Bible since I was old enough to reach the felt board in Sunday School, and I can tell you that Jesus never dropped an f-bomb, even though he had more than enough opportunities to feel angry, rejected, and hurt. Jesus suffered an unimaginable death when He was crucified for my sins. Yet, during the hours that he spent nailed to that cross, He uttered very few words. His first words were to encourage the thief who became a new believer while dying beside him.  Then, He asked His Father to forgive us all.

What are the best tools to combat Satan?

There are many times in my life that I feel like Satan is toying with me — having a great time at my expense. I justified my cursing by telling myself and my daughter that it was okay to swear at Satan.  Nothing in the Bible told me that Satan could ever change his ways.  So, why not toss all my evil words into the fiery pit with the devil?

But again, Jesus provides me the best example to follow. When Jesus fasted for forty days in the desert, that trickster, the devil, showed up and tempted him three times. I’m sure Jesus was exhausted, frustrated, and not excited about the enemy showing up, trying to trick him by using His own Father’s words against Him. 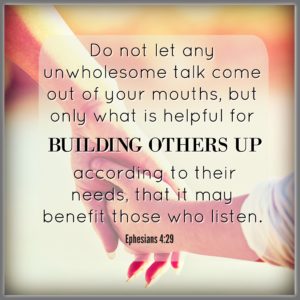 Jesus fought against the enemy’s twisted words by answering back with Scripture. As I read the passages, I could feel the power flowing through the words. I wonder if Jesus felt the strength of the Holy Spirit and the presence of His Father when He quoted them.

While I share everyone’s frustration with needles, long days without pizza, traffic, and all the daily hassles that cause us to lose our composure and want to curse, I’m going to follow the example of Jesus. He hears what is in my heart, even if it never crosses my lips.  And if He can do it, I know He will give me the power to do it as well.

Julie Christian has four children, ages 11,12, 20, and 30. She is married to the man of her dreams, Mike Christian, and she writes from her home in southwest Florida. Julie has completed two novels, Sugar Machine, and Her Father’s Ocean. She is currently writing her third novel, Come As You Are. Her work will be published in the upcoming devotional compilation, Abba’s Heart (Crossriver Media), and her story is featured in a chapter of Strength of a Woman (Crews, Ascender Books). She is president of her local Word Weavers chapter, and she also manages the Twitter feed for @wordweaversinternational. She is an ambassador and featured blogger at ScreenStrong Families Managing Media and a contributor to InspireAFire.com. She has been featured on podcasts such as Other Peoples Shoes, and Look out for Joy. She is frequently interviewed by local news media. She enjoys gardening at her home, which she lovingly calls “The Book Farm.” You can learn more about her and her work at www.juliechristian.com.