When you pass through the waters I will be with you. Isaiah 43:2

The image of water was a big deal to me during my cancer year. The power. The tranquility. The danger. The beauty.

Cancer was my water. Fear-inspiring, yet fused with the beautiful. So hard, yet covered by a peace I cannot explain. The water was rough, but Jesus was constant.

One night long ago on the stormy Sea of Galilee, Peter jumped out of a boat and began walking to Jesus. He sees a man walking to 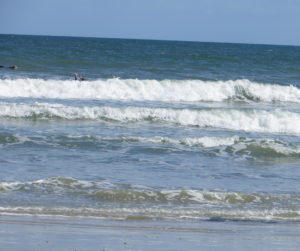 ward him on the water and says “Lord if it’s you, tell me to come to you.”

In her book, Crossing the Waters, Leslie Leyland Fields describes Peter’s walk like this.

“He walks atop the waves anyway for a few steps, but fear opens his eyes and ears too wide. He hears the wind; he feels the water at his ankles. He knows this is impossible-and he sinks.”

Whatever it is that got him out of that boat, he did it, and the most dynamic personality among the disciples took his first steps on water. But then his circumstances got the 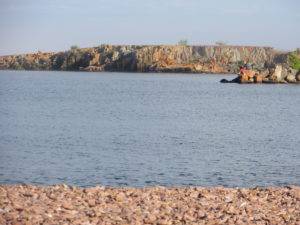 Peter’s story reminds me of my rough waters turned serene.

I didn’t jump out of the boat into the storm like Peter.

I didn’t say, “Lord, if it’s really you, tell me to walk out on that crazy, stormy sea, and I will hop right out of this boat.”

I was more like, “Oh dear Lord, someone pushed me overboard and I can’t breathe and the salt water is burning my eyes.”

When I listened to the screams of the tumor that pushed against my bra-line, I began to sink. But when I grabbed for Jesus, he kept me afloat. When he held out his figurative hand to me like he did his physical hand for Peter, I knew him.  “It is you Jesus. It is really you.”

Jesus knows that like Peter, my faith will waver. And he knows, like Peter, my fears will at times make me irrational. But still he holds out his hand. Because he is creating in me something new. A faith strengthened by a stormy sea.

“How many boats have gone down in just this corner of the sea…Yes so many saved, but so many lost. Even those who knew Jesus. I know he told it straight and often. “Whoever wants to be my disciple must deny themselves and take up their cross and follow me.” I know take up their cross means be ready to die. But who can do this?…Jesus, this God-man, can command every element of creation with just a word, but he does not always take away the winds. Jesus can sit in the boat with us, and that boat still might sink.”

I cannot think of a word in the English language that is emotionally charged enough to express my gratitude that my boat did not sink. That the waves did not overtake me.

But someday it will sink, because this life has no choice but to end in death. And when it does, I want everyone to see that Jesus was sitting with me in the boat the whole time, preparing the way home.