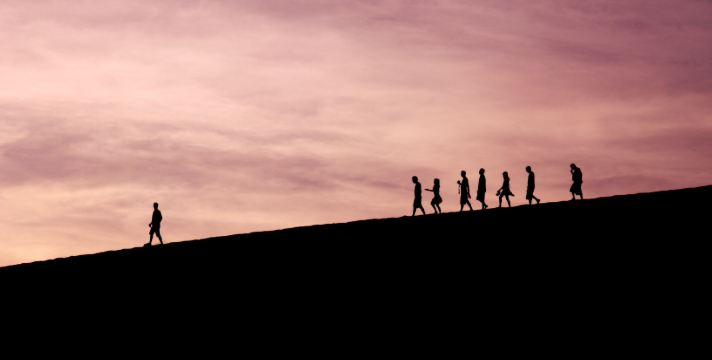 A substantial part of the success of many institutions rises and falls on its leadership. Entities like countries, teams, companies, families, non-profits, and churches.

And sometimes even in our own individual lives when we need leading for direction, purpose, goals, dreams, vocations, talents, and so on.

So, as with any other position or title, leaders come in many shapes and sizes.

There are average leaders, good leaders, not-so-good leaders, and great leaders. But there’s no category for perfect ones. Because no one’s without faults and downfalls—with one exception.

Greatest Leader Who Ever Lived

Only one leader in history was perfect. The greatest leader of all time.

He painted a picture of leadership we haven’t seen on the canvas of another human since. Look at some of His leadership qualities:

His name? Jesus Christ. The Son of God. The King of kings and Lord of lords.

Servant Leadership by the Greatest Leader

Jesus came from the splendor and glory of heaven. Yet, Jesus washed His disciples’ feet. He hung out with the poor, destitute, social outcasts, and sinners. He even made time for children and never thought they were only in the way.

Jesus not only waged war against evil, but also against neutrality to spiritual and moral beliefs. Christ annoyed the religious leaders and dignitaries of His day when He redefined what makes a great leader as He states here:

“You know that those who are considered rulers of the Gentiles lord it over them, and their great ones exercise authority over them. But it shall not be so among you. But whoever would be great among you must be your servant. And whoever would be first among you must be slave of all. For even the Son of Man came not to be served but to serve, and to give his life as a ransom for many.” Mark 10:42-45 ESV

Furthermore, looking at the life and ministry of Christ, we learn how He never compromised the truth in order to love others. Not once. Instead, He loved others with the truth.

Killing the Example of His Leadership

Although Christ was the greatest leader in the history of the world, they killed Him. Before we judge too sternly, we kill the example of His leadership:

Yes, Jesus’ destiny was always to die a criminal’s death to give everyone eternal life who calls on His name as Savior and Lord. But He rose again. And He gladly laid down His life for me and for you—the greatest love (John 15:13).

What if we let God paint the picture of leadership on our heart and life? What if we asked the heavenly Father to help us model the leadership skills of Jesus?

And what if we served others in humility, dispensed grace and mercy to those we influence, and loved people without compromising God’s truth?

Finally, what if we strived to die to ourselves and to resemble Christ—the only hope to live above reproach and to become a great leader?