He was born in the 1920’s, one of 12 children to parents who obviously loved each other –often. They lived in a small farming community, where education was a luxury not many could afford, especially during the lean times of the Great Depression.

Dyslexia didn’t have a name at the time, so he was told he was just stupid. And he believed it.

But my father-in-law was far from stupid. 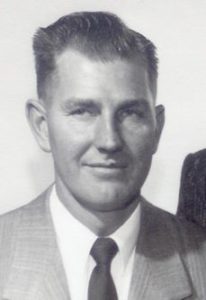 Dad left school at age 14 and started working to help support the family. His brain may have had trouble putting letters in the right order, but his mind worked exceptionally well in other areas. He could dismantle and reassemble a car engine from memory. His construction abilities would rival any carpenter. And he was a hard worker.

But that lack of education would come back to bite him.

When America entered World War II, Dad volunteered, like so many others. Although he already had a wife and a baby, his patriotism made the choice for him. By the time he returned from the war, his young son (eventually my husband) didn’t recognize him. They forever had a strained relationship, while the “war baby,” born months after Dad came home, was always close with his father. That always bothered my husband, but his brother and father didn’t see it.

After his fulltime service ended, Dad joined the National Guard to continue his commitment to his country. His mind was disciplined and attuned to military requirements, and reading wasn’t essential to his job or the reserves. As the years passed, he moved up in the ranks.

Dad was well-qualified for each position and performed it very well. However, it came to light that he had never finished high school. He was given one month to do so. But it only took him three weeks to pass those competency tests! Ever after, he took great joy in telling others that he was much smarter than most – he completed in three weeks what it took others four years to do.

But his country returned the favor. The army took a raw recruit and developed a man able to take care of a wife and two children, in addition to rising in the ranks to become a non-commissioned officer. He was a good man who left Mom with a healthy military pension.

Not bad for a dyslexic high-school dropout.