If you use the word reckon, you may be from the South.

Or you may be the apostle Paul.

Likewise you also, reckon yourselves to be dead indeed to sin, but alive to God in Christ Jesus our Lord (Paul in Romans 6:11 NKJV).

Or, maybe you’re a ship’s captain.

The captain sailed through the dark night by dead reckoning.

Except that for centuries, dead reckoning was an effective method of navigation used to deliver passengers and cargo to their destination alive. Usually.

Kind of like Bubba from South Georgia who reckons he’ll win this time.

Fallible Bubba analyzed his situation and determined that regardless of the past, or the challenges he’s facing now, or even the fierceness of his current foe, he believes he’s gonna win this time.

What does Bubba really know? Surely there are factors he failed to consider.

So when Paul tells me to reckon myself dead to sin, I’m not feeling confident assurance in my outcome.

But Paul’s not throwing out a command to hope.

He’s telling us to consider it done. Or like Jesus, declare “It is finished.”

Paul’s reckon (the Greek word logidzomai) deals with certainty and the belief in that certainty.

If I “logizomai” or reckon that my bank book has $25 in it, it has $25 in it. Otherwise I am deceiving myself. This word refers to facts not suppositions. (Bible Study Tools)

Well, now! I reckon I’m excited instead of discouraged.

Before, I’d misunderstood Paul to be saying, “Imagine yourself to be dead to sin.”

I tried. Do you know how hard that is?

Sin is fun if you’re doing it right. (It’s the aftertaste – not the moment – that wakes me up to sin’s true putridness.)

How can a sanguine hooked on fun say no to sin every time?

Once I discovered Paul was really saying, “believe the fact that you’re dead to sin,” I had to reconsider the facts.

First, Christ is dead to sin and alive to God.

I got that. It’s not a hard truth to believe. Sin couldn’t get Jesus when He walked earth. And it couldn’t keep Him in the grave. He triumphed over sin and the grave.

So, of course, I know and believe the fact that Christ is dead to sin and alive to God.

Likewise you also, reckon yourselves to be dead indeed to sin, but alive to God in Christ Jesus our Lord. (Romans 6:8-11 NKJV)

In other words, likewise (just like Christ is dead to sin) reckon (consider and believe the fact) yourself dead to sin, but alive to God in Christ Jesus our Lord.

In the writing world they teach us to grab the reader at the beginning of a sentence and to place the most important information at the end of the sentence so it sticks in our reader’s mind.

I don’t know if Paul knew that writing tip, but he certainly bookends his statement with two powerful truths – Likewise and in Christ Jesus our Lord.

In Christ Jesus our Lord

Believers are “in Christ,” no longer “in Adam.”

Remember Adam? He’s the one who brought sin into the world when he rebelled in the beginning. Every person ever born since then is born in Adam – in sin.

But when we trust in Jesus, we’re placed in Christ, and are no longer in Adam. That means we now have the same relationship with sin that Christ has.

For Christ, it’s an experience and a fact.

For us, it’s a fact we often don’t experience because of our choices.

Jesus will always choose not to sin. He cannot sin.

We, on the other hand, can sin like it’s an Olympic event.

We still wear sin-colored glasses and see what sin wants us to see rather than the truth.

We must take off those glasses and replace them with the clear lenses of the Word of God, the life-giving truth. 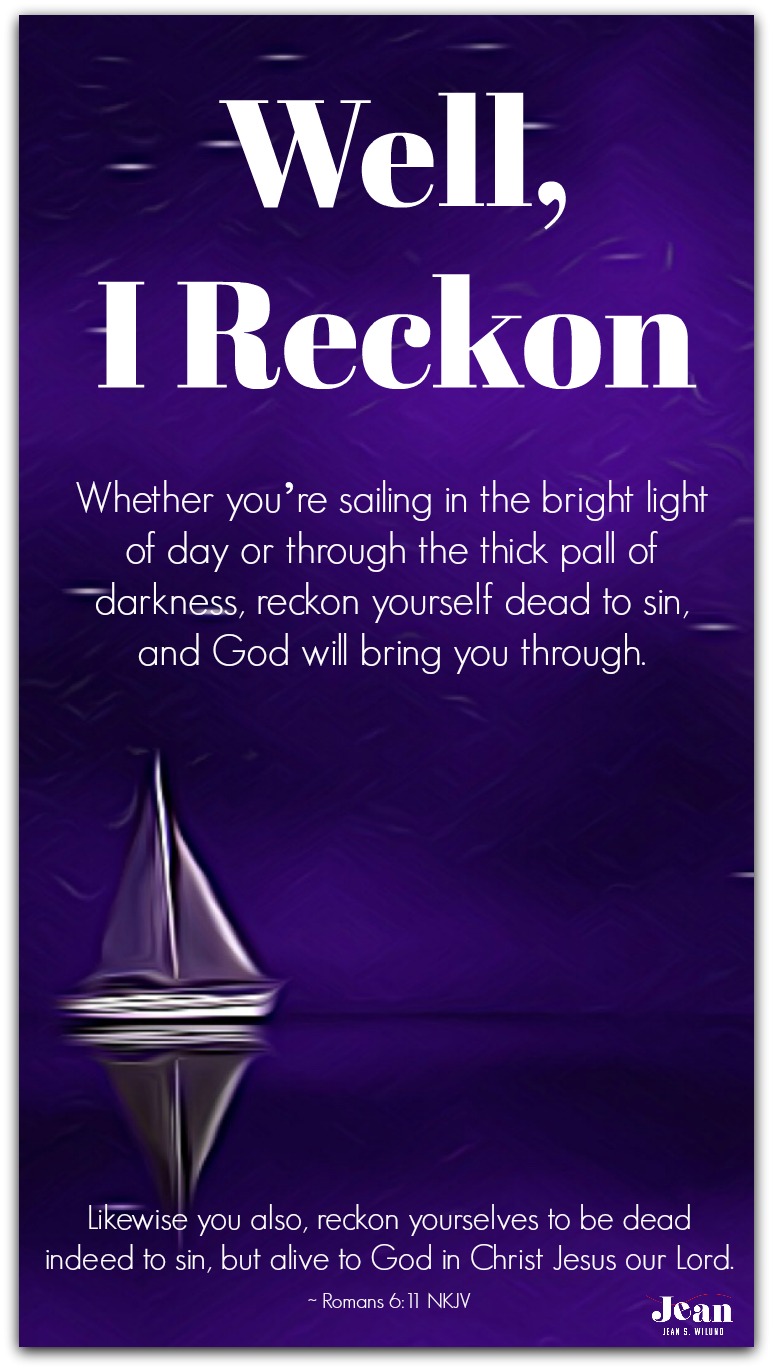 Then we can reckon ourselves dead to sin even in the face of appearances.

Despite sin’s allure, we can consider and believe Christ’s death to sin and its power was also our death.

We can dead reckon through any circumstance because we are alive to God.

Whether you’re sailing in the bright light of day or through the thick pall of darkness, reckon yourself dead to sin, and God will bring you through.

The facts will be your experience.

And you’ll be able to proclaim along with Bubba, Well, I reckon I’ll win this time.

For the death that He [Jesus] died, He died to sin once for all; but the life that He lives, He lives to God. Likewise you also, reckon yourselves to be dead indeed to sin, but alive to God in Christ Jesus our Lord.
~ Romans 6:8-11 NKJV

[bctt tweet=”Whether you’re sailing in the bright light of day or through the thick pall of darkness, reckon yourself dead to sin, and God will bring you through. #God #Jesus” username=”inspireafire”]