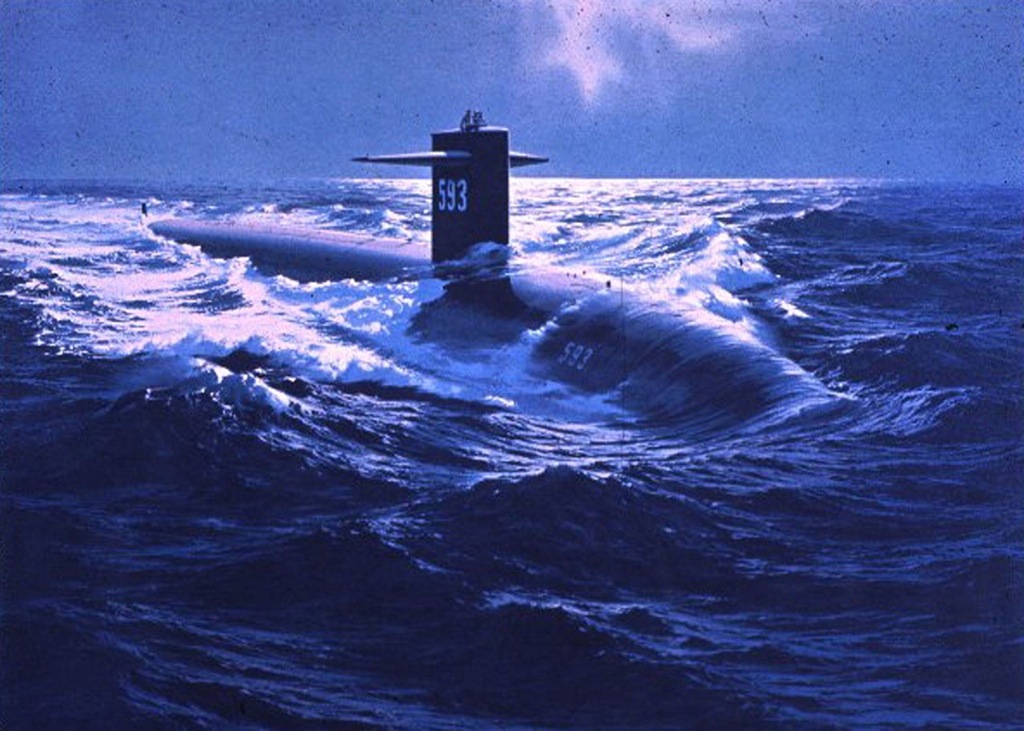 In May of 1968 the Navy sub USS Scorpion was scheduled to return to her home port of Norfolk, Virginia after three months of exercises in the Mediterranean Sea. Dozens of families waited on Pier 22 on a blustery, rainy Memorial Day with cardboard signs and balloons to greet their returning husbands and fathers.

The USS Scorpion (SSN-589) was the last U.S. submarine to be lost at sea, and one of two lost nuclear submarines. Rumors of secret sub wars with the Soviet Union spread amongst conspiracy theorists and Navy history buffs. They still do. Not an outrageous idea. This was 1968, after all. Vietnam was ramping up to the quagmire and political football it would become and the Cold War was at its peak. The USS Pueblo had been captured by the North Koreans, spy planes shot down earlier in the decade, and the world was an uncertain place.

All that meant nothing to the families standing on pier 22.

See, I was a Navy Brat. My dad joined in ’64, I was born in ’66, and he retired from the Navy in ’84. He served aboard three ships during that time. I’d hugged him goodbye on numerous occasions, went about my life of school, friends, birthday parties, and then went with mom to a pier after six months or so to wait with all the other famlies.

It was always the same. We’d stare at an empty harbor for what seemed like hours to me. Gulls shrieked at us for disturbing their day, the wind whipped our hair, and the sharp odor of oil and diesel stung our nostrils.

Finally, a little gray smudge would appear. The smudge would grow into a bump, then form into a ship. There’s nothing on Earth slower than a US Navy ship approaching a pier, especially to a ten year old boy missing his father.

Finally, the ship would nestle against the pier, tugboat engines growling and churning up the baywater. Lines would be thrown to sailors waiting below, gangplanks put in place, and men would start to stream out.

And, somehow, we’d find dad in all that mayhem.

But the ship, and dad, always came home. The ship was a rock. Permanent. A ship on the pier feels as solid as any landlocked building. The ship is always there. The ship always brings dad home.

But not the USS Scorpion.

When I think of those families, I feel pain. Anguish. Something had gone terribly wrong in the universe and the rock did not bring dad home to a lot of wives and kids that day.

Our God, though, is always there for us. He says so in His Word. But we often feel that He has left and failed to return. We feel the emptiness. The loss. After years of faithfulness, something has gone terribly wrong in our universe.

“Where are you, God?” we want to scream. But this is where my little analogy breaks down, because it is never God who sails away and doesn’t return. It is we who seek more pleasant shores and leave God standing on the pier. He waits. Much more patiently than a ten year old. He watches.

When He sees the smudge that is us on the horizon, He rejoices. But what about those many times when He’s simply left waiting, with no word from the one he loves? Does He feel the loss, the emptiness, of a boy who’s lost his father? Or of a father who’s lost his son?

If you’re there, drifting far from the pier, and the glassy ocean you set out on begins to lash out and pull you under the waves of this world, fear not. You can always change course and return to your safe harbor. No matter what you’ve done, He’ll be waiting. With a balloon and a cardboard sign that says, “My son who was lost has been found!”

He’ll reach out to you. All you have to do is toss Him a line. Do you need to do that today? No matter where you are. No matter what you’ve done. You don’t need to close your eyes and sink into the depths.

Bow your head right now and toss a line. Return to your pier.