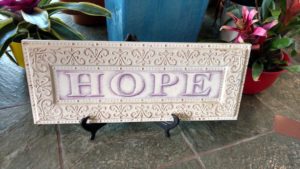 If there’s one thing in short supply these days, it’s hope. Politicians promise, but fail to deliver on their promises. Family members make commitments, but disappoint us. Terrorists strike with seeming impunity. Jobs are scarce, money is tight, and the more we wish for positive change, the less probable it appears to be. Good things seem more and more like a function of luck than anything else.

Sort of like what the nation of Israel must have been feeling 2,000 years ago. The glory days of King David and King Solomon had passed 1,000 years earlier. The Israelites – God’s chosen people – didn’t feel very special anymore. They had lived as a conquered people for more than 700 years, first under the Assyrians, then the Babylonians, the Medes-Persians, the Greeks, and finally the Romans. It had been 400 years since any prophet had spoken the words, “Thus says the Lord.” The peoples’ hope had been sapped, little by little and year by year.

Still, Israel hoped. They hoped for freedom from their oppressors. They hoped to hear from their God once again. Yet when God did speak, most of them did not recognize his voice. When God sent them the Savior they needed, they were too busy looking for the military leader they wanted.

Fast-forward 2,000 years. Some of us are holding on by our fingernails, clinging to hope because there’s nothing else to cling to. And along comes the Christmas season. Four weeks of stress added to already stressful lives. Decorate, write cards (personalized), cook (like the banquets pictured in the magazines), bake (perfectly shaped cut-out cookies), wrap presents (with color-coordinated bows)…and for what?

The “for what” is Emmanuel. Christmas is coming, a day when we celebrate the birth of the One who has saved us from sin and from ourselves. A day when God became man – God with us.

Jesus came to earth the first time in fulfillment of the Old Testament prophecies. His coming proved that hope in God’s Word was not misplaced. His first coming proves something else. It proves that when God’s Word speaks of His second coming, we can rely on this yet-to-happen event as much as if it has already occurred. It’s not a question of if it will happen, just when it will happen.

That’s biblical hope. Biblical hope is different from how we usually use the word hope today. Today we say things such has, “I hope it won’t rain,” but we have no idea whether it will or it won’t. Biblical hope is a certain anticipation, a knowledge that the only uncertainty is in the timing, not in the promise. God leaves nothing to chance.

As we wrap the presents (or not), and bake the cookies (or not), let’s rejoice that the hope for a coming Savior has already been fulfilled. And He’ll be back – because He promised. That’s a hope you can count on!

How has hope encouraged you this year?

After a 20-year corporate career, Ava Pennington is thoroughly enjoying her second career as an author, teacher, and speaker. Her book, Daily Reflections on the Names of God: A Devotional, is published by Revell Books and endorsed by Kay Arthur, founder of Precepts Ministries. Ava has also written for numerous magazines, including Today’s Christian Woman and Focus on the Family’s Clubhouse. Her work has been published in 30+ anthologies, including 25 Chicken Soup for the Soul books. Ava also teaches a weekly Bible Study Fellowship (BSF) class. When she’s not writing and teaching, Ava enjoys playing with her mischievous 5-year-old Boxers, Duke & Daisy. For more information, visit www.AvaWrites.com.