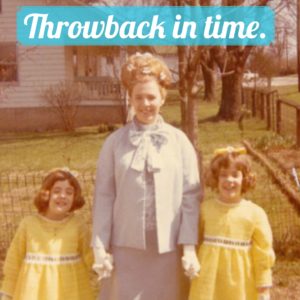 A throwback image not only captures people and places in moments of time. But it also stirs our emotions.

The image to the left uncovers an Easter throwback from my childhood, pictured with my twin sister and mother.

Besides Easter baskets, we celebrated with new dresses, gloves, and quite-the-fancy hairdos.

So, to achieve the look, my mom pin-curled our hair just before bedtime. The process involved twisting groups of hair in a circular motion all the way to the scalp, held in place with bobby-pins. When my head hit the pillow, I remember the not-so-comfortable feeling. Oh, what a girl has to do.

Fast-forward in time, I pin-curled my daughter’s hair on Saturday nights for church and for special occasions. A family throwback tradition.

Yet I imagine my mom’s hairdo in this image professionally styled. And the decorated netting showcasing her up-do screams “in-style.”

Posting content and photographs pertaining to the past depicts a popular social media trend. A wistful look back. A blast from the past. Pictures of yesterday, yesteryear, or many moons ago.

Taking ourselves, friends, and family back to a nostalgic time worth documenting:

But there’s one look back that changed my life forever. And we celebrate it this week. 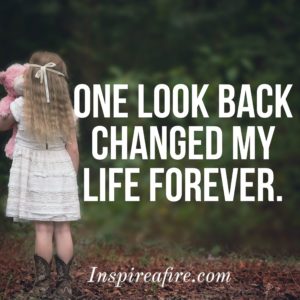 Throwback to many moons ago. A man’s arrested, though innocent of the accusations against Him.

How He looked. A picture of kindness, gentleness, compassion, and justice. Justice for the weak, abused, and those led astray.

But not belonging to the “in-crowd,” He’s certainly not “in-style” with the religious leaders of the day.

Taken into custody and blindfolded, they mock and beat the man. His face displayed the marks.

What was happening. Days and months before the arrest, He mentors a small group of men, giving them godly leadership as they followed Him. He spent time with them in person—zero likeness to following someone on social media.

They traveled together and visited people in nearby towns. He leads by example and shows His followers how to do life with others—you love unconditionally. Still further, He spoke with authority.

The supernatural happened in His presence. And this man offers himself in a selfless way, ministering to people. He helped others, served the communities, reached out to wanderers, outcasts, and the wayward lost without hope.

When it happened. This game-changer-man is about thirty-three years old. While historical scholars and theologians differ, approximate dates of these events in time range between 29-33 A.D.

Right before His arrest, He’s involved in an activity of interest—talking to His Father. Praying to God. Then soldiers come for Him, betrayed by one of His own. After His arrest, a close companion denies knowing Him. 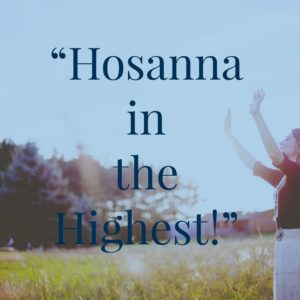 A throwback picture of betrayal, denial, and false accusations. He appeared before men in powerful positions with His fate clutched in their hands.

No evidence justified that He deserved prison or a criminal’s death. Still, many desired His execution.

Only days before the crowds honored this man with a triumphal parade. They shouted, “Hosanna in the Highest!”

Now, another shout ensues, “Crucify him!” What drastically changed their sentiments? Perhaps influenced by peer pressure. Maybe they believed false witnesses. Isn’t this the man who spoke great words to their hearts and healed a family member? Did they remember?

The scene begs a look deep inside each of us.

[bctt tweet=”Does my life cry out ‘Hosanna in the Highest!’ or ‘Crucify Him!’? @FridayKaren #Easter #blog ” username=”inspireafire”]

With an overwhelming majority vote, they released a known criminal to freedom. Jesus took his place. Therefore, they took Christ away for crucifixion among sentenced criminals.

Such a grim picture for the Lord’s family and friends. Once again mocked, beaten, and flogged virtually beyond recognition, and crucified on Calvary’s cross.

Flashback to that day. The darkest day in the history of the world. When Jesus Christ, Son of God, breathed His last breath.

But on the third day the light dispelled the darkness. Jesus conquered death and rose from the grave. He’s alive! The redemption of mankind brought through Jesus Christ.

[bctt tweet=”The #Messiah took our place and released us to freedom. His innocent blood canceled our debt. #resurrection ” username=”inspireafire”] 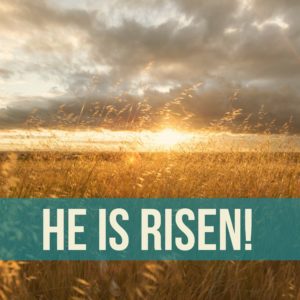 “And behold, there was a great earthquake, for an angel of the Lord descended from heaven and came and rolled back the stone and sat on it. But the angel said to the women, ‘Do not be afraid, for I know that you seek Jesus who was crucified. He is not here, for he is risen, as he said. Come see the place where he lay.’” (Matthew 28: 2, 5, 6 ESV.)

A throwback picture in time that changes our life forever.

Top Easter image of my family. Other images and image design by Adobe Spark.