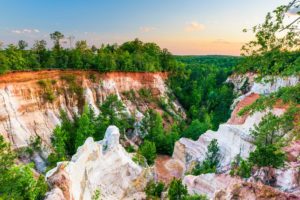 The Wise Man Built His House Upon The?

Recently, my family and I went on a hike in Providence Canyon. As most of you know, we recently moved to Georgia, and much of the landscape of our new state is novel to us. So, when we heard that there was a “Grand Canyon” of the east, we had to look!

Our hike was wonderful. It was a cloudy day, and it had rained earlier.  Everything was wet, and the moisture cooled the surfaces that were baking in the summer sun.

When we arrived back at the welcome center, we read about the history of this magnificent place. Providence Canyon isn’t a natural canyon, but an accidental one caused by poor agricultural practices and erosion. Its name comes from the Providence Methodist Church, which was sucked into one of the largest manmade holes.

“I thought the wise man built his house upon the rock!” I said when I learned of the church’s fate.

We all had a good laugh, but the Grand Canyon of the East got me thinking.

I’m sure the good Methodists thought that their church was built on solid ground.  At the time it was constructed, it’s not like they had computers or sonar or any of the tools that might have helped them figure out what the ground beneath them was made of, or what would happen when the people of the community began drilling wells and using the groundwater to irrigate their crops.

I imagine the people of the town worked hard to set up their new homes, lives, and farms.  Much like Mike and me, they were making a fresh start in a new place.

Believing that God had brought them to a new, promised land, they probably thought, Let’s build a church so we can worship God in this new place. 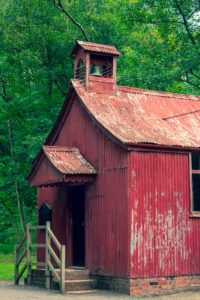 “Ohhhhhhhhh, but the rains came down…”

We all know the song.  The rains came down, and the floods came up…and the wise man’s house stood firm. And oh, what happened to the foolish man? His house went “crash,” of course!

The people who built Providence Methodist Church weren’t foolish. I’m assuming they did the best they could with the information they had at the time. But nobody knows what God’s plan is for us, or for the things we create and build.

We can build homes, lives, and futures for ourselves, but we must remember that at any moment, God can send us to a new place. Without warning, God can create a canyon out of a church.

Only God knows what is going to happen tomorrow. Only God knew that the church these people built, hoping to baptize generations of new believers, would crumble into a huge, gaping hole in the ground.

People now come from miles around not to hear the preaching or listen to the choir but to see the layers of vibrant colors that line the canyon’s walls: orange, yellow, purple, and red.

Despite the efforts of man. The people come to be amazed by God. 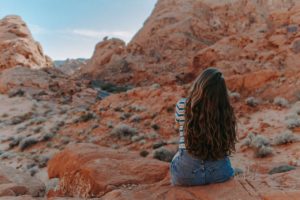 God is bigger than architecture, advancement, and agriculture.

He is more powerful than planning and preparation.

And with the soft sprinkle of a tiny raindrop, repeated over a hundred years, he can create a huge canyon out of a tiny church to remind us that our power as humans pales in comparison to the power of great hands that created the universe.

And the same power that can wreck the Providence Methodist Church with a raindrop can build the same greatness within us.

Lord, give me wisdom and discernment. Always allow me to recognize your magnificence, glory, and power. You are the creator of the universe, and in one breath, you can give and take away. Nothing the work of my hands can build will remain unless you want it to. We praise you and honor your mighty power.