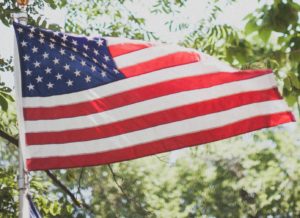 July fourth has passed, but each evening the night air resounds with evidence of leftover fireworks stashes being depleted.

Celebrating the birth of our nation is fun, but it’s easy to forget that those fireworks are meant to mimic the sounds of battle…battles in which lives were lost in the fight for freedom. A freedom which united this nation as the United States of America.

While we enjoy the benefits of those freedoms, our conversations often seem to celebrate division rather than unity.

These days it’s almost impossible to have a calm discussion about the direction of our nation and the relative merits of our various political leaders. Emotions run high and opinions are severely divided. Permanent rifts have been created in families. Long-term friendships have been destroyed.

Children are not immune from the political bickering in their families, churches, schools, and neighborhoods. They pick up the language—both good and bad—of those they admire. They have learned to refer to those on the other side of the political aisle with names they would never be allowed to use in any other context.

The bottom line is that the United States is still a great nation whose freedom was purchased and protected by the lives of men and women who believed the sacrifice was worth it.

It’s up to us to live worthy of the price they paid.

After a 20-year corporate career, Ava Pennington is thoroughly enjoying her second career as an author, teacher, and speaker. Her book, Daily Reflections on the Names of God: A Devotional, is published by Revell Books and endorsed by Kay Arthur, founder of Precepts Ministries. Ava has also written for numerous magazines, including Today’s Christian Woman and Focus on the Family’s Clubhouse. Her work has been published in 30+ anthologies, including 25 Chicken Soup for the Soul books. Ava also teaches a weekly Bible Study Fellowship (BSF) class. When she’s not writing and teaching, Ava enjoys playing with her mischievous 5-year-old Boxers, Duke & Daisy. For more information, visit www.AvaWrites.com.