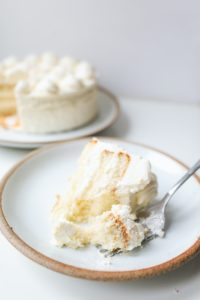 My Dad’s birthday is on May 1st. I always struggled with what to buy him as a gift.  When I was younger, my childish gift ideas didn’t seem fitting for the man who worked harder than any person I’d ever known. As an adult, I saw many years as a single mom. Back then, I couldn’t afford to buy him a gift. My dad gave me more “gifts” than I ever gave him.

There was one thing my dad did like, though, and that was food.  On his birthday every year, I would make him an Italian Cream Cake — his mother’s recipe. I remember her teaching me how to separate the eggs and whip the whites into stiff peaks for the batter.

No time to celebrate

The last year he was alive, he didn’t want a cake. My grandmother was in hospice, and she was close to dying. “It just doesn’t seem right to celebrate,” he said. I remember I talked him into taking a break from sitting vigil at the hospice with my mother.  I took him to a nice lunch at a local deli.

He paid, of course.

And that’s why May is a tough month for me.  Then comes June.  I knew that the theme for this month would be Father’s Day because of course, we should all honor our fathers.

Those of us who don’t have fathers anymore settle for honoring their memory — which really falls short, if you want to know the truth.  I still find myself envious of the women on Facebook who still have their fathers.

They can still write thoughtful notes inside cards that will make him cry. They can cook his favorite meal. Take him fishing.

My father is gone, and I can’t share a single memory or give him a single gift.

So many questions left unanswered

Another thing I can’t do is ask him difficult questions.  Like, “How do I change Mom’s mind?” and “How did you get Daniel to stop crying without saying a word?” There are so many things I wish I could have asked him before he died. 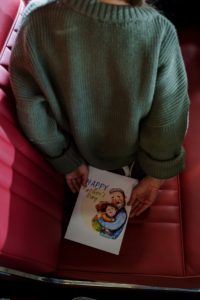 But life doesn’t work like that. And if I’d had a warning, I would have ruined the remaining time doing silly things like baking cakes and writing notes on cards.

One of our last conversations was about heaven. The family had gathered to say goodbye to my grandma, and one of my Baptist uncles asked my dad if he was going to Heaven. Dad bristled at the question.

I remember when I was taking an evangelism training class at the fancy private Christian high school my dad worked his fingers to the bone paying for. He had taken us out to dinner after an orchestra concert.  It was a rare night together as a family. I realize now he had likely made the difficult choice to let work go for the evening to be with us.

I repaid him and his efforts to send me to a wonderful school by choosing that mealtime to evangelize to him. Guess I showed him what his hard-earned money was paying for! But my father was a private man — and a man of few words at that. He didn’t want to discuss such personal matters with anybody, and definitely not over dinner at the Golden Corral with an overzealous fifteen-year-old.

I don’t blame my uncle for asking my father the same question. But I knew the answer would be quick and short.

Later that day, my dad and I were alone in his truck, and he mentioned my uncle’s question to him.  Then he added, “Me and God are good.”

The last lesson he taught me

Maybe, I should have asked him why he believed he was going to heaven.

I had every tool needed to lead my father to Christ.

Less than a week later, he was gone, and now I will never know.  And like most daughters, I now must take my father at his word that he and God are good.

This Father’s Day I am reminded that my father taught me many of life’s greatest lessons. The last lesson he taught me was the most valuable.

You’ll know I love you if I ask you, “Where do you plan to spend eternity?”

If you’re not sure of the answer, go here.