The just shall live by faith.  Martin Luther was a young monk determined to get it right. He spent hours in prayer, introspection, and confession in a desperate attempt to gain God’s approval. He performed acts of penance that make us cringe today. Yet he still struggled knowing that nothing he could ever do was good enough to gain God’s favor.

Then, in a “lightning bolt” moment, he stumbled across a verse in Romans that changed everything for him. “The just shall live by faith.” Surely the verse itself was no random discovery for the monk. He knew the scriptures well and studied them constantly. But in that one moment, the truth of those words flooded his heart and gave him peace. 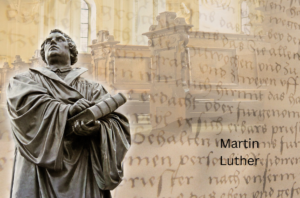 In that short phrase, he found answers to the questions that persistently plagued him. A short while later, he nailed his manifesto – the 95 Theses – to the door of his local church. This was the equivalent of posting a debate resolution on the wall of the local debate club. But it sparked a movement we know today as the Protestant Reformation.https://wps.ablongman.com/wps/media/objects/1497/1532958/MartinLuther.pdf

The just shall live by faith. Not self-flagellation or punishing penance. No. Faith and only faith is needed for salvation.

The church of Luther’s day unnecessarily complicated things and  created a system that encouraged the wealthy to attempt to purchase their salvation and left the poor bereft of hope. In Luther’s lightning bolt moment, he realized all this was pointless, and all come to salvation the same way – completely helpless to save ourselves. We are all completely dependent on God’s grace and mercy.

A Faulty Theology is born

The problem is– it is human nature to try to add something to the formula. We don’t want it to be so simple. We want to add our own unique flavor to salvation.

I grew up in a very strict family and a very strict church. If you had asked any of the leaders of that little church how to be saved, they would have been glad to lead you through the plan of salvation and assure you that salvation is by grace through faith. I memorized the Romans Road and could lead you in the Sinner’s prayer long before I had much experience with sin or sinners.

I knew I couldn’t earn salvation, but I was convinced that there were things I had to do to keep God’s favor. We had strict rules about how we dressed, the movies we went to, if we even went to movies, and the music we listened to. Many of my friends rebelled, and some of them have never returned to the church.  But not me. I was a good rule follower and never veered far from the trail.

I don’t think there was ever a time that I would have been so brazen as to say it, but I believed that God’s favor was a given for me, because I followed the rules so well. Of course, my rule book didn’t include Jesus’ declaration that all men would know I was His disciple by how I loved my fellow Christians.

Our rule book wasn’t the Bible, although we could support any of our “standards” by verses of scripture, often taken out of context. It was an amalgam of accumulated tradition from times past blended with new standards that applied to the present. It was complicated, and few of us really understood why we acted like we did.

I didn’t drink or smoke, lie or steal. And there was a whole host of things I couldn’t do on Sunday. I created an internal check list, and checked off those boxes with arrogance. And of course, I expected that God would bless me for my lifestyle. It was a kind of mathematical formula: if X, then Y. If I could do all the “do’s” God was obligated to do things for me. I had read the Bible through multiple times. But I had apparently missed the books of Job and Acts, just to name a few.

So when a natural disaster struck my town and I was not spared the consequences, it wasn’t just my home and my stuff that disappeared, but my carefully constructed theology lay in ruins. I had done all the right stuff. So why was God picking on me? It seemed obvious that He was.

I know this sounds self-centered and childish. It was. I’m not proud of how I responded. I knew nothing of gratitude. And I shut down spiritually. I mean, what’s the use? God wasn’t following the rules, so why should I?

But God used that situation to teach me who He really was, and who I really was. He absorbed my anger and frustration until I was exhausted and ready to listen. I had my own lightning bolt moment. Like Luther, I was reminded that nothing depended on me. I wasn’t good enough to accomplish anything. Luther was reminded “the just shall live by faith.” God whispered to me, “I love you. Period.” He didn’t love my service, my supposed holiness. He loved me, even the angry, resentful me I had become.

I didn’t nail a manifesto to a church door. But I nailed one to my heart. I changed. A lot. I apologized to people I had hurt. I began to read scripture because I wanted to know the Author, not to impress anyone with my piety. I went to church not to check the boxes, but to worship with others in my spiritual family. I learned to love God’s people and God’s word. I was transformed. I no longer followed a rule book. Slowly I was learning to follow Jesus, not the shallow idol I had created.

Trying to earn salvation is futile and exhausting. It has always been about faith. It has always been about trusting Him for what I cannot do for myself. Adam and Eve tried to cover the shame of their disobedience in crude aprons of fig leaves that would shrivel and fall apart at the slightest touch. Human effort is like those aprons. It doesn’t cover anything for long.

When I realized that I really was powerless to earn God’s favor, I found a God eager to forgive and redeem all my wasted effort.

The Just Shall Live By Faith

Hebrews 11 illustrates what a life of faith looks like. And it’s not a chronicle of wildly successful individuals who had no problems in their lives. 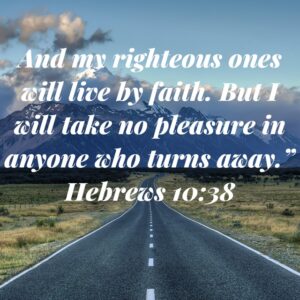 Instead, the writer highlights people who had real struggles, even some like Sarah and Abraham who at times tried to live life on their own terms. Many of them faced adversity I can’t even imagine. What they all have in common is that they lived and died by faith.

The Danger of False Assumptions

Far too often, we judge each other. We assume because someone faces a lot of adversity that they have brought it on themselves, that if they only had faith, their problems would evaporate. https://inspireafire.com/when-trials-strike  Job’s friends had no answer for the horrible tragedies that struck him. Instead of saying “Job, this is awful, and I don’t know how you’re dealing with this” they assumed that he had some horrible sin in his life. None of them could identify what he done wrong, but that didn’t stop them from making false assumptions. Their unfounded accusations must have rubbed salt into Job’s already painful wounds. Job was blameless. God had said this in the beginning, and Satan had affirmed it. God allows things that seem unfair.

Even though Job was a good man, it didn’t mean that he didn’t have anything to learn from his ordeal. After chapters of debate and rebuttal, Job continued to assert his innocence. And God showed up in a whirlwind.

But He didn’t enter the debate. Instead, He said, “Job, I need you to see something.” And He displayed His power and the intricacies of creation to Job. In effect, God said, “Job, I’m God and you’re not. You just have to trust me on that.”

Job learned patience and compassion and probably a myriad of other things through the trials he endured. And after God rebuked Job’s friends for their false accusations, He required them to ask Job to pray for them. So Job had to learn to forgive. And he did. And when he prayed for his friends, he was restored.

I imagine Job was a different man after all he went through. He had faced the worst Satan could throw at him and still trusted God. Job didn’t have much to fear after that.

Martin Luther’s life was transformed by the words “the just shall live by faith”. He no longer struggled with being “good enough”. But His willingness to tell the world that salvation was by faith alone didn’t sit well with those who profited from telling people they had to earn salvation. He spent the rest of his life as a wanted man.But like his spiritual forbears in Hebrews 11, he didn’t live in fear.He translated the Bible in common German during one trying period of exile. He wrote song in the common vernacular of the day.   He wrote A Mighty Fortress is our God while hiding in a man made fortress https://gccsatx.com/hymns/a-mighty-fortress/

This song is a statement of faith, and a reminder that we have a foe ready to destroy us. But we have a defender, Jesus, who will defeat the enemy Our part is to trust Him. 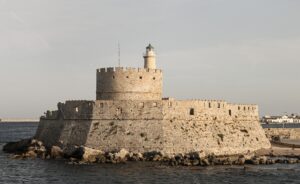 The just shall live by faith. It’s still good news.