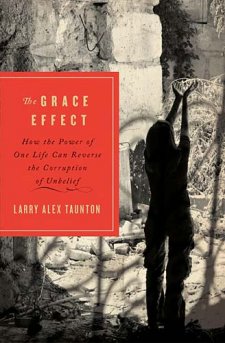 The Grace Effect by Larry Taunton, is a contemporary account of one family’s journey to adopt a little girl from a Ukranian orphanage. Taunton uses his tale to portray the effects of the near eradication of Christianity from the former communist society. While communism is but a memory in Ukrania, the destructive effects of socialism live on. And its most horrendous aftermath can be seen in eyes of its abandoned children; abandoned by both parents and society.

While Taunton does mention the well known facts of socialism’s brutality, the millions dead, starved, and impoverished in the name of “equality,” the focus of his book is to reveal the less publicized effects of socialism. Namely, what a society becomes without Christianity’s influence.

Most striking is the story of the child herself. Little Sasha lived in Orphanage #17. If the name sounds colorless and reminiscent of POW camps, it’s probably not too far from the mark. The state-run orphanages in Ukrania are essentially places to provide the bare minimum requirements for survival for the unwanted elements of their society. Bare minimum, by the way, apparently does not include showers, toilet paper or even toilets, for that matter. The girl, like most orphans, is the socialist society’s throwaway.

The next most striking element is the absolute, unapologetic corruption that is so much a part of the Ukranian system that the government actually rolls bribes (gifts) for officials into the normal fees. Several times during their six-week ordeal, the adoption procedures were delayed simply because the official had the power to do so. Even when given a “gift,” the official would often still delay the proceedings.

During the time you’re reading the horrors of a liberal government run amok, you keep thinking, “But this child will suffer in one of your cesspools you call an orphanage if you don’t move your rear!”

They don’t care. And this is the point of the book. The atheist’s utopia will always degrade into a society that treats other members like objects to be used, no matter how vulnerable and helpless they are. In fact, the Ukranian officials knew the desperation of Sasha’s plight and gleefully preyed upon the emotions of the adoptive family to line their pockets. Taunton noted on several occasions that the only luxury cars in the country were owned by the mafia and public employees.

I highly recommend this book to anyone who would like to offer a good defense as to why socialism is inherently corrupt and how a society reverts to animalistic behavior in the absence of Christian influence. Even atheist’s inherit moral behavior from a society based on Christian foundations. Although, as the author points out, once Christianity is eradicated, the fumes of moral behavior will soon evaporate.