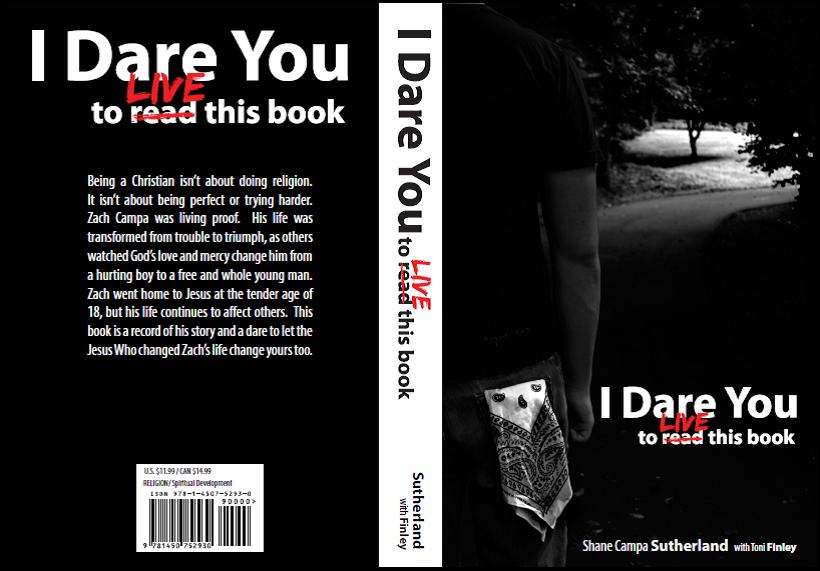 The day Zach entered Heaven is only the beginning. He had quite a testimony of struggle to freedom. Until the last 12-18 months before his death, Zach had fought courageously to face hard stuff in order to walk free with Christ and be comfortable in his own skin.

My book, I Dare You to Read this Book, shares Zach’s whole story – a tragedy to triumph story all by itself. Because people had watched Zach
change right before their eyes, they had seen evidence of the life-changing power of Christ.

People are drawn to Zach’s story, especially teenagers and parents of teens. We can hear that God is all-powerful and can change lives, but that can become “Pollyanna” church talk sometimes. Packaged within the story of a real teenager who lived his life wide open for others to see, the message becomes relatable, tangible, and believable. It becomes REAL. And God is using it to change lives.
When I think about all God has done since August 31, 2008 I can barely comprehend it. The one thing I can say is that God is faithful. Oh, I had days in the first couple of years that I wondered if our family would ever survive this giant kick in the gut. But, He has brought us each through it all, and we are stronger on the other side. This tragedy may have been a plan of the enemy, but everything that God allows has either been ordained by Him, or has been bought back for His purposes. I can testify that, no matter what, He holds. He redeems. He makes all things new.
Today you have heard from a mom who lost a son and survived. In the strength of Christ, I am not only surviving, I am thriving in His triumphant victory! In whatever struggle you may find yourself today or someday down the road, I can’t think of better words to leave you with than from my son himself. These are exact words recorded in his journal on January 22, 2008:
“That should also be my continued prayer that I surrender all to God just like David. And just like Christ gave his own life for me and everyone in the room. That should be my motivator, that one act can cause everyone to say “Hey, he can do it, so I sure can!”

Ane Mulligan writes Southern-fried fiction served with a tall, sweet iced tea. While a large, floppy straw hat is her favorite, she's worn many different ones: hairdresser, legislative affairs director (that's a fancy name for a lobbyist), business manager, drama director and writer. Her lifetime experience provides a plethora of fodder for her Southern-fried fiction (try saying that three times fast). She's a humor columnist for ACFW's e-zine Afictionado and a syndicated blogger on Patch.com. V.P. and Senior Editor of the award-winning website, Novel Rocket, she's published dozens of plays and numerous articles and won several awards in contests for unpublished novels, including a three-time Genesis finalist. A past Board member of ACFW, she's mom, a grandmom, and resides in Suwanee, GA, with her artist husband and one very large dog.