It all started with the Boy Wonder. In the fall of 2005, my mom made Batman and Robin costumes for my boys. The two-year-old became smitten with Robin. I remember the morning I was awakened at the crack of dawn to my Owen, standing right next to my bed, his little towhead inches from my face. 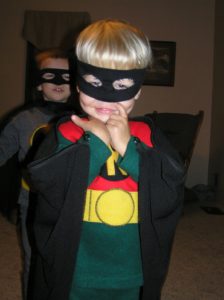 “I waked up. Can I be Robin?” he asked to me with those bright blue eyes shining.

In that sleepy moment, I had no idea what was in store for me. That for the next two years, this child would live his life as a super hero. After Robin, it was Superman, Spiderman, Zorro, Flash, J’onn J’onzz, Hulk…if Marvel or D.C. Comics created him, we had the costume.

Grandma, the seamstress, was a busy woman sewing alter-egos for her grandson. I’m sure at some point in her life she had dreams of sewing frilly little dresses for granddaughters (especially since her own daughter was not the frilly dress type), but God chose to bless her with five male grandchildren before finally giving her one lone granddaughter, so she traded in her lace and bows for capes and masks.

We went to the grocery store as Superman, Lowe’s as Batman and the park as Zorro. It was even common to find him asleep in a cape and mask, after he had been tucked in bed in regular pajamas. The only place I did not let Owen go in costume was church. I’m pretty confident God it would’ve made God chuckle, but it just didn’t feel right to me.

I remember during those years having women a couple decades my senior approach me at the grocery store and the library with that knowing smile and say things like, “Oh, I remember that age. My son was always flying off the couch in a cape. Enjoy it. My superhero is 23 now.”

In my mind, my super hero would never grow out of it. He would be flying off the furniture and saving the world from the bad guys forever. And for two solid years, that’s just what he did. Then, one day he decided to dress in the human clothes in his closet. And eventually, he started wearing boy clothes more often than superhero clothes. In fact, one morning as he was getting ready for school he said, “Mom, why do you always make me wear these Spiderman shirts. It makes people think I like Spiderman, and I don’t like Spiderman.”

What? Did I hear that right? What happened to my web flinging wall climber? He can’t be growing up. Other people’s kids grow up. Mine are supposed to stay little

But that’s not how life works. I realized I was destined to become one of those nice ladies who relives the past as they see young moms buying groceries with their super heroes in tow. I even say things like, ‘Enjoy it while it lasts. They grow up so fast.’ And other phrases that so easily rattle off the tongue of people who have been there. And each time it happens, there’s a tiny little ache inside of me.

But in reality, I didn’t want my little boys to stay little. I didn’t want them to live life unchanged, wearing capes and masks to Chemistry and Bio. The whole goal of parenting is to raise children to become responsible adults, pointing them to Jesus along the way.

Seasons change. Children grow and change. And that is a good thing, even though it can be hard on a mama’ heart. But what is even better is that this Jesus that we share with our kids, is unchanging. Our God is the same yesterday, today and tomorrow. He provides us with beautiful seasons of change, but he is the unchanging one that we can trust with our lives.

Hebrews 13:8 Jesus Christ is the same yesterday, today and forever.