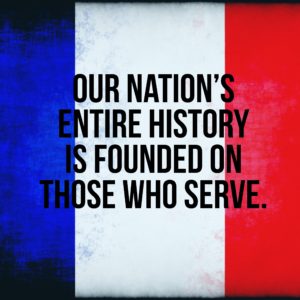 Our nation’s entire history is founded on those who serve.

As an eighth grader, my son, Caleb, entered the Patriot’s Pen Essay Contest he heard about from his teacher. And the guidelines specified entries highlight those who served our country in the military.

Sponsored by the Ladies Auxiliary to the Veterans of Foreign Wars of the United States, my son won first place.

Caleb, along with the second and third place winners, read his essay as a speech at our local Veterans Administration campus during a special ceremony. I was proud of him. Yet, what an honor for me, his mom, to listen to him give honor to members of our military.

And the program was complete with the Pledge of Allegiance, a full color guard, the National Anthem, and servicemen and women.

Caleb is now twenty-six. For thirteen years, I hung onto the first place award and his essay, neatly tucked inside a scrap book. I want to share it with you.

What Service to Our Country Means to Me

“Service to our country is important to most Americans. Our nation’s entire history is founded on those who serve. Without their faithful service, our county would be hopeless. America is a great country due to many people who have served it well.

The safety of our nation relies on the bravery of men and women who endanger their lives to protect this country. There are four branches of the Armed Services: Army, Navy, Air Force, and Marines. These military groups, along with the National Guard, serve and protect our country during times of war and times of peace. Many military men and women have sacrificed to provide freedom to our country. Veterans of war, prisoners of war, and casualties of war have given freedom to us.

America has experienced many wars in its time, all of them coming at great costs. Although I am only thirteen, I am already experiencing a time of war during our present war in Iraq. This war has shown me how important service is to our nation. We need to be protected from terrorists and countries that promote terrorism. Times of war can bring uncertainty and fear to Americans. Due to the people who are serving our country, we do not need to be fearful.

All throughout America’s history, service has been the important factor that 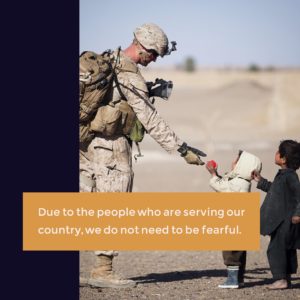 helped hold our nation together. The President of the United States, along with other government officials in Washington D.C., support and direct our military forces.

As an American, I am proud of our military and I want to show my support for them. This unity of everyone working together has given our nation its great reputation.

Service to our country provides freedom in many forms: freedom of speech, the right to vote, equality of all people, a democracy, and others. Since the birth of our nation, American has had a reliable and dependable service that I believe will carry on far into the future.”