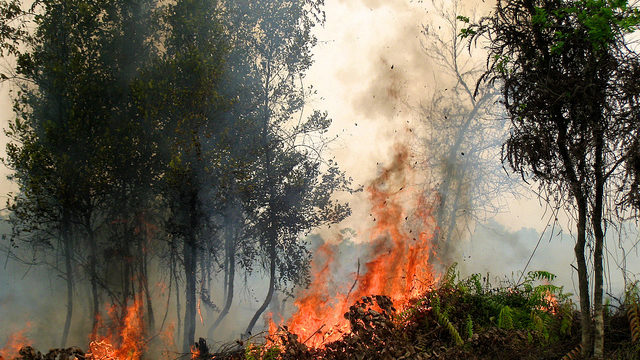 Did you know that for decades the giant Sequoia trees in Yosemite park have stood barren?

Like most things, they are given sunlight, water, and a protected environment to grow.  Over the decades, we have tried to do what we think is best for them and we have ended up feeling like failures. Their lack of reproduction the results of our own doing.

We can’t help it. We protect the things we hold dear, nurture the living to go on living, and put out the fires before they come in reach of destruction. It’s who we are. It’s an instinct most of us are born with.

But sometimes we have to let the fires burn until they burn themselves out.

Take for instance the Sequoia trees. These large beautiful trees in Yosemite park have lived for over 3,000 years. When natural fires ignite around them, firefighters have rushed to put out the flames in order to preserve them.

But not any more.

The natural, lightening-induced fires are vital and important to the survival of the Sequoia trees and to our ecosystem. Without these fires, the forest becomes overgrown and, when a fire does occur, they become deadly to our existence. By preventing these natural fires, we have prevented the forest from being able to cleanse itself.

Like being told you can’t take a bath after falling in the mud and feeling weighed down.

Now imagine you were a Sequoia tree and your very existence relied on naturally occurring forest fires.

A Sequoia tree’s bark is thicker than any other tree so it can withstand hot flames from a forest fire. It depends on these fires to burn its pod cones and release the seeds. Without the extreme heat to release the seeds from the pod cone, the tree can’t reproduce.

When the flames of the fire die down, the earth is now ready for a new generation of Sequoias.

Just like God designed us all with special purposes, He too, designed the Sequoia tree to serve as a vital part of our earth’s ecosystem. God gave this tree a strong, thick bark to protect it from the very flames necessary to its survival, and he designed its seeds to raise up from the ashes of the forest floor to spread new life.

And when everything has gone wrong in our lives. When we are pushed from that job or home we once had. Or when we lose some one dear. Sometimes it’s just God clearing the underbrush so we may rise again stronger, wiser, and ready to serve him.