At the beginning of January, my team landed in Japan. As the first World Race squad to ever come to this country, we really had no idea what to expect. My favorite. I thrive off of discovering things along the way and not knowing what to expect.

Almost as soon as I stepped off the plane, I fell in love with this country. Especially the city I am living in, Sanda. Sanda is nestled up in the mountains about 45 minutes from Osaka. Far enough away from the city to have that small town feel I so love. The people here are very friendly and welcoming and have blown us away with their giving. My team is working with four different churches that have come together to host us. We are teaching English and doing about a hundred other things to serve their ministries. Everything from cleaning and painting to putting on kids programs to passing out flyers, we have done it all.

One morning, my teammate Kayla and I were at a prayer meeting with Pastor Ando at his church. Pastor Ando and his family have gone out of their way to make us feel at home and even played games with us before prayer meetings so we could practice our Japanese. This particular prayer meeting, Pasto Ando pulled out little colorful squares of paper and told us we were going to make origami. Pastor Ando, his wife, and one of the other church members then proceeded to show us how to fold the paper into impossible shapes.

I have never made origami before and I really had no idea what I was doing, but Pastor Ando patiently showed me how to fold the paper over and over again. One thing I noticed when making origami is that many times you will fold a crease into the paper, only to unfold it immediately and move on to another spot. At first this confused me immensely. Why would you fold a crease there only to undo it? But as we continued to fold the paper, I began to see that the seemingly useless creases in the paper were actually needed to pull together the creation at the end.

How similar is our life to origami. Sometimes I feel like I am being folded and have creases placed in my life that I do not understand. I walk through situations I do not understand. God closes doors I think should be open. And sometimes people walk out of your life who you thought would be there forever.

The LORD directs our steps, so why try to understand everything along the way? Proverbs 20:24

Even when I do not understand why things happen in a certain way, I know that because God is directing my steps, the end result will be amazing. When I was folding and unfolding that paper over and over again, I had many doubts about what it would become, but just at the right moment with one final fold and one gentle tug, a swan emerged from my creased blue paper. A beautiful swan. 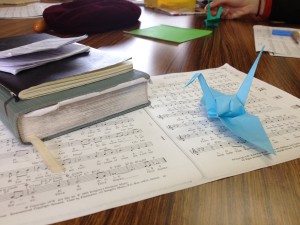 When you are walking through situations you do not understand, and things seem to be happening for no reason, remember that like origami, every crease has a purpose.

Amanda Goodroe is a recent graduate of Louisiana State University with a degree in Mass Communication with a focus on print journalism. Amanda went on her first mission trip at age 16 to Costa Rica. This sparked a passion for other cultures and people groups around the world. In September 2013, Amanda left the States to spend 11 months traveling the world as a missionary and she is blogging about her experiences traveling the globe with only a backpack. Amanda enjoys reading and drinking as much tea as possible. To read more from Amanda, follow her blog at amandagoodroe.theworldrace.org