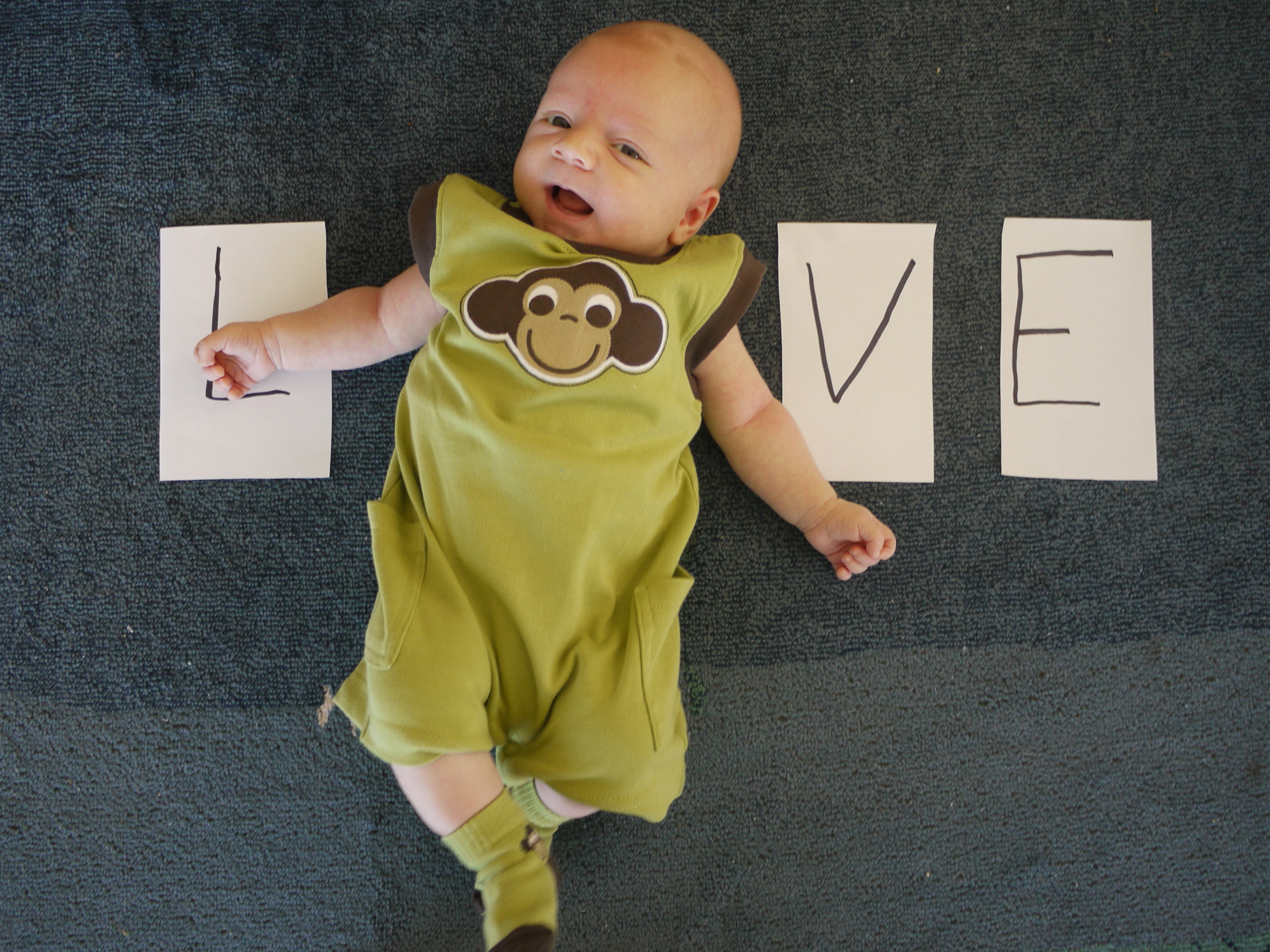 Three weeks after my first child was born and two days before my husband, Mike, left for a month in Laos, Mike and I went out to dinner.

Over dinner, we talked about what the month apart would hold for us and the challenge I had set myself to blog about the fruits of the spirit (Galatians 5:22) as they related to mothering, marriage and the miscellaneous of life.

“Are you going to do them in order?” Mike asked. “Because if so, I’m going to miss most of love.”

Mike said this if it were an entirely novel scenario instead of a disturbingly regular occurrence that we are on opposite sides of the world and missing out on love.

“Yes,” I said. “Don’t feel bad, you wouldn’t be getting much loving if you were here, anyway. Not with a three week old baby demanding my time, attention, and body.”

Mike considered this in silence from a moment and then brightened.

“Oh well,” he said, smiling in the manner of someone who has just had a private naughty thought. “That means that during the month of self-control you’ll be back in Laos during the hot season. And I get to watch.”

I thought about all the things that might test my self-control where we lived in Laos, took another bite of pork belly rolled in apples and dates, and sighed.

“So what are you going to write about first?” Mike asked.

“I don’t know,” I said. “Two days ago I set myself the goal of coming up with one idea or issue a night during the midnight feeds.”

“How’s that working out for you?” Mike asked.

“So what were you thinking about the first night?” Mike asked.

“The difference between love as an action and love as an emotion,” I said. “And how I didn’t feel like I felt love the moment they placed Dominic in my arms. I just felt cold and shaky and shocked and relieved that I had somehow – against all the laws of physics – actually managed to get him out. I think popular culture leads us to expect that we should feel that rush of emotion. I know some women experience being overwhelmed by feelings of love just after birth, but surely others don’t? I wonder if a lot of women get tripped up by that lack of feeling instant love.”

“Are you feeling tripped up by not feeling it?”

“When it comes to babies maybe it’s a feeling that follows an action,” I said. “Maybe it’s due to cognitive pokies games dissonance.”

“Cognitive dissonance,” I said. “When you hold two conflicting ideas at the same time it causes dissonance which messes with your head and makes you uncomfortable, right? We are generally motivated to reduce this dissonance by changing our thinking about one of these ideas to bring them more into line with each other. So… if you go through nine icky months of pregnancy, then think you might die giving birth, then have to get up in the cold and the dark every two to three hours to feed the little being, maybe subconsciously you figure that you must hugely value anything that costs you this much and that’s where all that love for your baby comes from.”

Mike took a bite of steak with mushrooms while he mulled that over.

“There’s something really wrong with that,” he said finally.

“Yeah,” I said. “Just for the record, that’s definitely not the dynamic at work in generating my love for you. I don’t think.”

“That might be the sweetest thing you’ve said to me today,” Mike said. “All week, even.”

Dominic is five weeks old now and I still don’t have what love is in relation to a child anywhere near sorted out, much less where it comes from. But this has been my experience so far: Love has not swamped me like a tidal wave; it is creeping in slowly, like the tide. Dragging myself out of bed at 3am in the cold darkness to feed Dominic is love in action. Wanting to kiss his little face after he’s eaten when I know there’s a good chance he’ll baptize me with secondhand milk – that’s love the feeling.

What do you think? Is love a feeling or an action? And if love for our kids doesn’t spring from cognitive dissonance, where does it come from?