“God goes to those who have time to hear Him. And so on this cloudless night He went to simple shepherds.” ~ Max Lucado

The earth lay in a silky blanket of night. A chilly breeze drifted across the field carrying the bleating of the sheep near and far. Stars like diamonds glimmered — too numerous to count, too beautiful to fathom. In the eastern sky, a star shone high above the others, its beams of light touching the earth.

The night was still, silent but for the lambs.

But not so for the nearby town of Bethlehem.

A cacophony of jarring noise filled the night in Bethlehem. Travelers from throughout Judea pushed and shuffled through narrow spaces — men, women, and children inconvenienced by the mandate of Caesar Augustus to register for a census. Wagons and carts clanged on the dusty roads. Frustrated people banged on doors and raised voices at innkeepers who had no more room. Others shouted greetings to familiar faces. Horses, sheep, and donkeys added to the fray.

And just a short distance away — a miracle.

A Child was born.

Right there. In their midst.

But the busy, distracted people missed it.

[bctt tweet=”A #Child was born. Right in their midst. But the busy, distracted people missed it. @NanJonesAuthor #Christmas” username=”inspireafire”]

Even the night sky pulsating His glory went unnoticed by the harried people.

Beneath the star studded sky in a field outside of town, shepherds lounged on meadow grass, resting weary bones, taking in the peaceful stillness of the night. Out of the darkness, light from a brilliant star cast a beam across the flock. Slender reeds of grass bowed in response. The sheep stopped their grazing.

The simple shepherds raised up on their elbows. Jaws dropped. Eyes opened wide with wonder as the darkness lit up with a heavenly glow and hearts beat in rhythm with their Maker.

“And behold, an angel of the Lord stood before them, and the glory of the Lord shone around them, and they were greatly afraid. Then the angel said to them, ‘Do not be afraid, for behold, I bring you good tidings of great joy which will be to all people. For there is born to you this day in the city of David a Savior, who is Christ the Lord.”

And then their eyes were opened to see.

The night sky was filled with angelic hosts heralding the birth of the Christ Child. The Savior was born. The angels’ melody of praise burst through the darkness into the radiance of God’s glory. 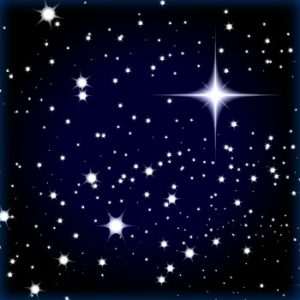 Darkness of night was dispelled.

God revealed His miracle to the least of these — the simple Shepherd.

I wonder if He chose them because the folks in town were too busy to notice.

This post first appeared on Nan’s blog December 14, 2016. If you would like to spend time with Nan focusing on Jesus this Christmas, please join her at www.NanJones.com as she prays through Advent, cleansing her heart, seeking Him first, and reflecting on what the greatest gift of all means to the children of God.