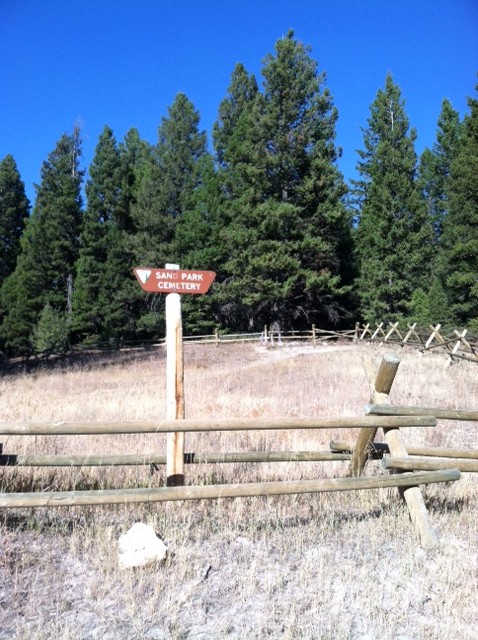 What inspires curiosity in you? This antique Old West graveyard, three miles West of Garnet, MT has me fascinated. Five headstones. William, William, William, Tom, and Frank lie here under beautiful quartz rocks. Don’t see the quartz rocks? On my research trip, I didn’t recognize them either.

Here’s another close up of William Ross’ grave. He died in 1898. That’s all it says. No month, no relationship to a spouse, no special saying of any kind. We have no idea even how old he was. He’s just one of the five known graves in this small, historically preserved setting. The white rocks are from mined quartz. Someone took the time to pack the tops of each resting place with fine, sparkling rocks. The quartz packed onto each grave wasn’t noticeable until I hunkered down to study the grave close up.

Trees dropped pine needles for over one hundred years. Those needles decomposed on top of the graves leaving dirt blankets. In order to care for the graves, someone also posted five similar headstones made of wood. The men buried there are named on weathered wood already grayed and splitting from years in the elements.

I’m fascinated by the “W” carved into a chopped down tree stump right on top of William’s grave. Who did it? Why? I found a handful more of chopped down sapling stumps. All had a deeply carved “W”. Other hilly spots appeared around the field as if there might be more than meets the eye. I’m very curious as to why the five antique graves appear so lonely in a large field surrounded by a new fence.

Were the men I visited good men? Did they know the Lord or have a faith story?

How long before my story, my faith is weathered and forgotten?

How, Lord, may I share my faith in you so deeply that the mark of my faith is left as permanently as the carved letters in the stumps? Or is it your will that the affect of my faith changes lives for generations to come regardless of where my body is laid to rest, whether my grave can be found, or my headstone destroyed by the elements? Rather than a spot memorialize me, please help my faith to be so noticeable in my lifetime that others are curious about you, Jesus.