Death rears its head in many forms. The recent shooting in Pittsburgh’s Squirrel Hill district hit a little too close to home. Last year, it was Las Vegas and the other numerous places. But most of the time we hear of it on the news, we watch the reports and our heart and sympathies go out to those who have been affected.  And it isn’t even the mass shootings that bring about the reminder of the darkness others are battling in their lives.

When news of the Pittsburgh shooting came to me, I wasn’t far from Pittsburgh. I had a friend whose son had gone to an appointment not far from the shooting. We stopped the meeting, we prayed and while my friends’ son was safe, so many others had lost their loved ones.

I hadn’t thought about the darkness we see, we carry inside, or what it does to us in long term. Not until two days later, as I sat at the funeral of a man whom I had only met once.

Once had been enough. It had been enough for me to dab at the tears running down my cheeks as his siblings and his family spoke of their love for him. To hear their sobs at the loss of a man who couldn’t fight his darkness.

And that’s what they had called it. Darkness.

A man who suffered from depression. A man who told others to leave him alone and so they did. A man who took his own life because the others around him left him alone — too much, and now they grieve and wonder if a simple phone call, a visit, could have changed the outcome.

We all wonder. We all want to shine the light to scare away the darkness.

Sometimes the things we can’t change end up changing us.

As I stood beside my friend during his father’s funeral, he said to me. “I’m at peace with this. At first I got so mad, then I cried, and now I’m okay with this. My father had darkness. I couldn’t have fought it for him. We have to all fight our own darkness, but if he would reached out, I would have been there to help him stand strong.  But now, my dad doesn’t have to worry about the darkness because he’s in a mansion filled with light and God’s love. I just hope he knows how much love we all have for him.”

And it was at that moment I stood in awe of my friend who, with the loss of his father still fresh, could illuminate a light in the darkness and bring peace where disharmony lingered. I pray for that kind of peace for all of us. Not just for the family and friends of those who recently passed, or for Pittsburgh, or for my state, but for all of us… everywhere fighting the darkness surrounding us.

There is no greater love then the love of God. And there is no greater pain then the pain of losing the ones we love. Rather than dwell in what we have no control to change, we must allow the change to mold and shape us into the form God has created us to become. When we surrender only to God, we find a light so bright, no darkness can ever extinguish.

Change is upon us. Will you help be the light? 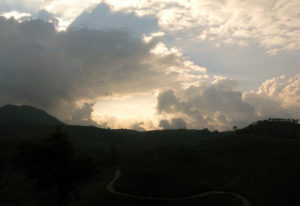