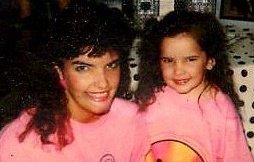 At first, I thought it was just my little secret.

As a first-time mother, still basically a child myself, I gazed into the eyes of my newborn daughter. Resting on my raised knees, her hand literally wrapped around my finger, she strained to open her eyes against the force of the bright lights above. She squirmed with determination until her eyes locked in on mine, which told me all that I needed to know.

Somehow, out of all the mothers in the world, I had been chosen to give birth to the perfect baby. I wanted to write out a thank-you speech, in case it was needed at a moment’s notice. My heart, swollen with pride, still was not big enough to hold all that I felt at that holy moment.

A small part of me felt a bit sorry for the other parents, peering through the glass, tapping on the window, snapping pictures, and admiring their regular babies thrashing around in that nursery on that snowy January morning. Couldn’t they tell that the light was a little brighter above our daughter? Once they saw her, with her head full of dark hair and oozing perfection, they were jealous.

I could just sense it.

I realized later, after the medication had worn off and I had gotten some sleep, that all of the mothers felt the same exact way that I did. There were no imperfect babies in the Baptist Hospital Nursery on that particular day, nor on any of the days that followed.

Fast forward some twenty years later, and my daughter, with her eyes still piercing my soul, said these words. “Mom, my whole life you told me how perfect I was, when what I really needed was for you to tell me that it was okay if I wasn’t. That I didn’t have to be perfect all the time.”

Gulp. How could this be,? How could my carefully chosen words, meant to build my daughter up, have the reverse effect of pressuring her to keep up a façade of perfection?

I was quick to defend myself. “I never expected you to be perfect, but then you came out that way, and I thought it was my responsibility to let you know.”

She didn’t buy it, and then went on to tell me that eventually, she had to tune me out because I was her mother and I had to say those things.

As parents, my husband and I had always been honest about our own imperfections. We had to be; they were usually hanging out there for everyone to see, especially our children. We apologized when we messed up, allowed them to see our struggles and our prayers for strength in the midst of them.

But somehow, I failed to convey that same message to my daughter. I see now that for the compliant child, those who strive for approval, the thought of letting someone down is the greatest, self-inflicted punishment of all.

By example, I demonstrated on a daily basis how to make mistakes and then laugh them off. But I’m not sure she ever learned how to do this for herself.

Maybe, as her mother, I should have taught her that being perfect all the time is impossible. And exhausting.

Maybe I should have focused on the perfection of Jesus, instead. Because perfect people are in no need of a Savior. This is something she would need to know, as an adult.

Maybe I should have made it a bit more clear; there are no perfect children.

Still, is it my fault that she came out that way?

All the other parents were just a little bit jealous. I could just sense it.