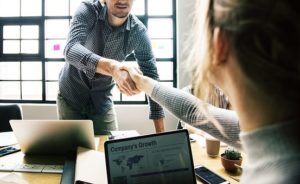 Since you asked about “the olden days,” I thought you’d enjoy a written account of the primitive conditions in which Grandpa and I grew up.

Facebook hadn’t been invented back then, so meeting people and making friends was a complicated process. It involved rituals like talking to people, shaking their hands, and asking them questions about their interests.

We lowered and raised our car windows by cranking a handles attached to the inside doors of the cars. We unlocked the car doors with keys, and had to lock them by pushing a button down by hand!

Garage doors could only be opened and closed manually, with a handle on the front. We had to get out of the car, walk to the garage, and open or close it ourselves.

TVs in the dark ages had no remote controls. We got up from the couch and walked across the room to change the channel or turn the volume down with a knob attached to the front of the TV set. We had no couch potatoes in those days, either.

When we used telephones, we had to dial the other person by poking our finger into holes in a numbered plastic circle on the front of the phone. We even talked to the person on the other end. In those days, a text referred to a book we used for schoolwork.

We also sent messages to friends with items called letters, written with devices named pens, on sheets of paper, and we put them in a blue box on a street corner. They were sorted and sent in a truck to our friends’ houses. Sometimes they took days to arrive!

I know this has shocked you, and you’re amazed that we survived. But people in the olden days were tougher. Without Facebook, remotes, and texting, we had to be.

With love, Your Savvy Grandma

The above is an excerpt from The Heart of Humor: Sixty Helpings of Hilarity to Nourish Your Soul

Irish redhead and former history teacher Jeanette Levellie is the author of four books and hundreds of articles, stories, and newspaper columns. Among her publishing credits are stories in Guideposts anthologies, CBN.com, and Country magazine. Jeanette is also a vocalist and speaker, splashing hope and humor on audiences of all sizes and styles. She and her pastor husband Kevin are parents to two adults, grandparents to three children, and servants to four cats. They live in Paris, IL., where the winters are frigid but the people are warm and friendly. Her hobbies include fitness, reading, and finding new ways to avoid housework.