Mother kneaded the dough ball, rolled it into a snake, folded it over thrice, worked it into a ball once more, and kneaded it again. This I knew—the bread-making that provided sustenance for our table was labor-intensive. 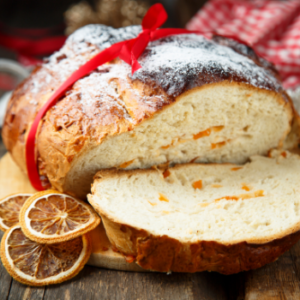 A plethora of scents filled Mother’s kitchen. The woodsy odor of yeast tingled my senses as she measured a precise leveled teaspoon into the center of the flour, followed by the beachy aroma of salt, which she put to the side. Apparently yeast and salt don’t get along. I smelled oil wafting from the gas oven’s inner workings as she drew a match to preheat it. Following this was the fragrance of the bread itself—my favorite sense-teaser. As it baked, my mouth watered in anticipation of biting into a hot buttered slice.

Each loaf smelled different, depending on what she added—cinnamon, orange zest, poppy or sesame seeds. My favorite was cherry and chocolate. Oh, how my nose would delight in the coco and cherry fragrances as she’d add these to the almost-finished loaf.

After a few hours, Mother went into the kitchen and punched the perfectly risen bread ball. I’d kept a check on the red checkerboard linen towel, waiting to see the tell-tale dome form underneath the cloth, indicating the yeast was working. It seemed comical that she worked this masterpiece a second time, reducing it to a third of its risen size.

“Mother, why must you punch the loaf again? It’s so pretty…”

“Nothing about bread making comes easy, child. It takes precise measurements, and strong arms willing to thoroughly kneed these loaves. Now it’s going to be a prettier loaf,” Mother said, returning the towel atop the loaf pan. The dough would rise again before she’d baked it.

“You know,” I said, rather sheepishly, “I can ride my bike to the store and get us bread any day you get tired…”

“I’ll have nothing of the sorts,” Mother snorted. “Do you like to eat?”

“Then I must work. This bread has nutrition baked into it that my growing girl needs. Unlike those…”

Mother nodded, measuring and sifting flour for the next loaf.

Study to shew thyself approved unto God, a workman that needeth not to be ashamed, rightly dividing the word of truth.

Bread-making requires work. Mother demonstrated this well. But the results were unmatched. Mother was in charge of every ingredient that went into the dough—whole wheat flour or other grains for sustenance, salt for flavor, yeast for a fluffy loaf, bran for energy—and she was also in charge of what did not go into the loaf–preservatives, sugars, and food dies. When our family ate Mother’s bread, we received optimal nutrition. 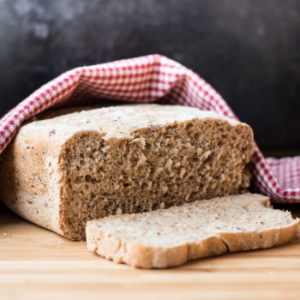 Like breadmaking, developing spiritual discipline requires effort. We have a choice as to how much time we are going to devote to our pursuit of God. We don’t earn our way into Heaven—eternal life is a gift from God the Father through Jesus Christ’s sacrifice on Calvary’s cross. However, in order to experience the best life, spiritual growth must be intentional. This is not difficult when we realize the Bible is God’s love-letter to us.

Spending time reading God’s Word can be a daily discipline, or an afterthought. It takes work at first to develop the habit. But, in a short time it becomes a delight we never want to miss. Just like Mother’s homemade bread was a delight even before it was fully baked, committing to spending time meditating on the treasure-trove of God’s Word positions us for continual success. Further, we become a blessing to those the Lord sends along our path.

Become the aroma, friend, of a twice-kneaded bread loaf, so you can experience the best life, and nourish those around you. Be so in love with Jesus that you become as remarkable as twice-risen bread. Jesus Christ, the Bread from Heaven, gave His life on Calvary’s cross to redeem mankind. Our gift to Him is to become spiritually established. When we take the time to fall in love with Him, this labor of love makes us complete and filled with joy.

What are the benefits of making Bible reading a daily habit?

Heavenly Father, help me to make reading Your Love-Letter, the Bible, a daily practice. Enlighten me, that I may receive Your blessings, and become a blessing to others.

Diane Virginia (Cunio) is the founder/director of VineWords: Devotions and More, the co-editor/co-compiler of Love-Knots: Stories of Faith, Family, and Friendships (VineWords Publishing), and the author of The Kiss of Peace: A Contemporary Exploration into Song of Solomon (Mount Zion Ridge Press).