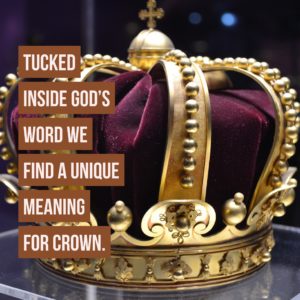 I imagine the three kings of Orient in a Christmas play. My mind’s eye pictures inauguration ceremonies of royal monarchs. I envision crowning moments of beauty pageants.

Iconic Disney princesses displayed in crowns. I even think of paper crowns from Burger King. And plastic versions adorned with jewels, the finishing touch to a little girl’s costume.

But tucked inside God’s Word we find a unique meaning for crown. The action verb used to describe a calendar year.

“You crown the year with Your goodness, And Your paths drip with abundance” (Psalm 65:11 NKJV).

What reaction occurred when you read the passage?

So, I know this is not school or even a test. Yet, I want us to think through the power of that Scripture as it relates to God’s goodness and a calendar year. 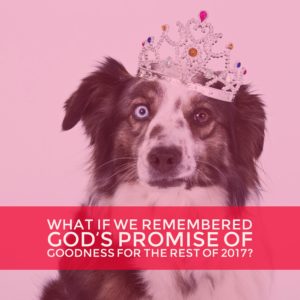 In January, I posted this article on my personal blog in a revised version for the start of a new year. I hoped to inspire my readers and myself to let God crown 2017 with His goodness—to expect it and to ask Him for it. And not just in January, the entire year, January through December.

Now, we think about this year winding down and coming to a close. But instead of jumping ahead to what 2018 might hold, what if we asked and expected God to crown the last three months of this year with His goodness?

Sparks from New Year’s fireworks often spark our intentions to make the new year better than ever. But what if we remembered God’s promise of goodness for the rest of 2017? Not stepping ahead of the Lord, but walking in His promises every day, from now till December 31.

A King of Goodness

The Lord wants to be involved in our plans and goals. What about our dreams? He put them in our hearts. And we’re confident the Lord of lords and the King of kings will walk with us every step of the way. Every step.

I want my entire calendar year crowned with goodness. Not just any goodness. My version of goodness—the human kind—often fails. People aren’t good all the time, even crowned people.

So, my heart longs for the rest of 2017 crowned with the goodness of God himself.

I imagine goals and dreams these last three months are part of His path and they will “drip with abundance.” 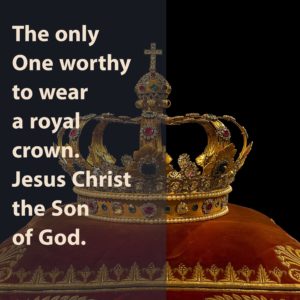 Iconic symbols of earthly crowning moments? Each wanes in comparison to the only One worthy to wear a royal crown. Jesus Christ the Son of God. The goodness of God tops inauguration ceremonies of presidents and kings. It trumps titles this world offers.

There’s more days and moments in this calendar year to experience God’s goodness. Yet, a day is coming when I will wear a crown of gold (Psalm 21:3). The crown of life will be placed on my head (James 1:12) because Jesus wore a crown of thorns for me, and for you.

Prayer: Lord, I worship You seated on the throne, high and lifted up. I magnify Your majesty and splendor. You are worthy to be praised and exalted above all earthly kings, authority, and crowns. Thank You that no matter what tomorrow holds, You are good all the time and Your goodness never changes. Never. I cling to the promise that You will crown the remainder of 2017 with goodness for in You alone is spiritual abundance. Lord, I crown You with many crowns and lay my earthly crowns at Your feet. Amen.