You say, do what? Is that really you, God?

I’ve found myself in this position many times. Flat on my face on the threshing floor, waiting to see if the fleece turns wet or dry. Testing the spirits with a good case of “gideonitis,” asking God to reveal if I’d heard him. Only HIM! After many years spent in God’s permissive will, also known as the will of my flesh, I’ve learned how fruitless it is. And above all else in life, I desire God’s perfect will. Not what he merely allows. But through the years He’s asked me to do the seemingly absurd or the impossible. To name a few incidences:

In April of 2000: “You want me to resign from my career with great benefits. The one I went to college for, and earned a Masters degree, to follow you 2000 miles away from family, a thriving business, and amazing friends, and do what?” It felt like God called me to jump off of a cliff.

Twelve years later: “You want me to let go of a care-taking/property management position where I’ve lived in a cabin in the Northern Rockies for over a decade, and go where? To Baton Rouge? But what about ___” [That blank had too many “what abouts!” to list.]

God gave me multiple, clear indications each time I’ve asked. Especially regarding the bigger steps. And in the most trying request he’s made of me, he told me the specific sign to look for. And the sign came to me less than an hour later. Yet, I confess that gideonitis still creeps in. Even after God has proven himself faithful and trustworthy through a million steps taken for him the past 17 years. Yet with each request he makes of me, it seems like the ante is upped and my odds for success are reduced to the impossible. The only way for success to happen is by the hand of the One who made the call. Because the reality is beyond my all. A deeper test for my faith to grow. 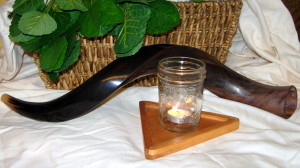 But scripture gives us Gideon to glean from. Once he got up off the threshing floor, God began to tell him the signs to look for. And Gideon stopped questioning! Whatever God asked of his servant, this self-proclaimed “least of the least” simply obeyed. Even when God reduced his army down from 32,000 men to 300 to fight against 135,000 ruthless Midianites… using a horn [shofar] and an empty jar with a torch inside!

Really God? This is absurd. This is mission impossible! [This is Jennifer interjecting what she would think, going back to the threshing floor.]

Yet, by this time in Gideon’s walk with God, he just did it. He walked the instructed path where a miracle was needed, in order for the miracle to occur. Gideon cured his own gideonitis with worship, faith, trust and action. He began to follow God’s instructions with unshakeable confidence that God would not forsake him. And at the end of this mission impossible, the Midianites lay at Gideon’s feet, by no other means than the hand of God—The Miracle-maker!

Has God called you to walk out the absurd? Have you found yourself on the threshing floor too many times, diagnosed with gideonitis? When we face mission impossible, let’s begin with worship. Let’s lay the impossible on His altar, not on the threshing floor. Let’s be still before him. Let’s seek God with confidence and trust, and simply walk out His call. Because like Gideon, there is a cure for our doubts and feelings of inadequacies–our gideonitis. And God is faithful to show off  wherever He calls.