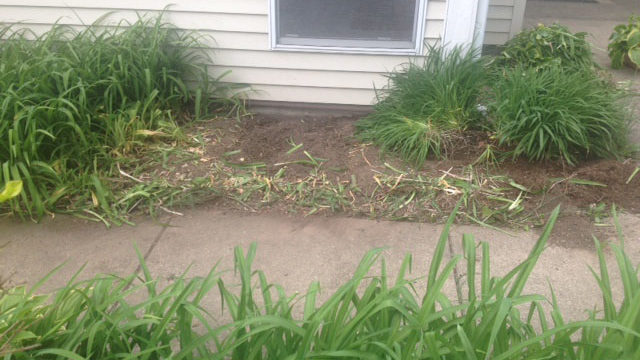 I grew up around a rhubarb patch that grew like weeds. We mowed it down, gave it away, ate as many pies as we could hold, and still that little patch grew like a jungle. Imagine my surprise, then, when I moved a thousand miles away to a land of rhubarb scarcity.

Six dollars a pound at the grocery store! Are you kidding me?

And so, with my recent move out of my apartment and into a townhome, I set about my first order of springtime business: replacing my landscaped ornamentals with something a little more my style. 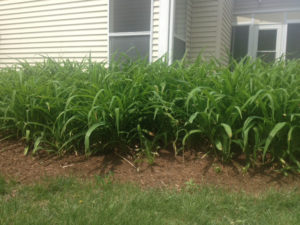 Armed with a rusted shovel donated from a friend’s surplus, I attacked a patch of overgrown lilies that had grown into an impermeable hedge. I chipped away at the soil half inch by half inch, feeling the shovel head wobble with every stab. More than once I heard a splintering sound as the shovel head threatened to crack completely away from the handle. Which brings me to: 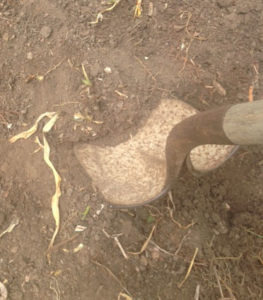 I made remarkable progress as only a splintering shovel motivated by visions of rhubarb pie can do, but after several hours of toil my neighbor came to investigate.

“You’ve got a job ahead of you. Those lilies haven’t been touched in years,” she said.

“I can tell,” I replied, wiping sweat and smearing dirt over my face.

She offered me the use of a tool that looked remarkably like the shovel I was already wielding. “It might be a little sharper,” she suggested.

“Well, I have got to get one of those,” I replied.

Spade in hand, I was still struggling to extract the mass of greenery. Knowing I needed to get to the root of the problem, my instinct was to aim low. But sweat and toil taught me:

Yes, the root of the problem needs to come out, but sometimes it takes a little time to get there. Not only did hacking through foliage give me immediate satisfaction for having clean-swept an entire swath, it also made it easier to see where I was digging. Each stab brought me a little closer to the underlying culprit.

Lesson #3: Build, or rather dig, off your progress 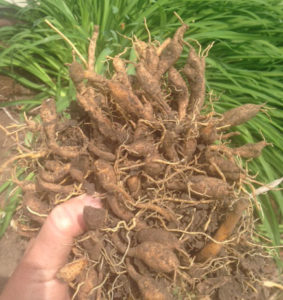 The ground was such a mass of gnarled roots I couldn’t get even the spade to do much more than scratch the surface. But as I chipped away at a section, I could feel it loosening. Once I broke through enough to get under a root I was able to pop out a root ball twice the size of my fist. Using this slight success as a launching point, I kept chiseling.

Digging up problem roots was painfully slow. For each one I unearthed, 200 more were waiting at my feet. But the more I dug, the looser the whole structure became. The next clump was easier to get underneath and rip out. And so was the next one. Until dirt rained down and a whole section broke free. 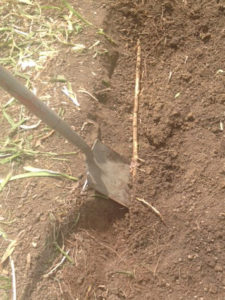 Then just when I thought I was making progress, I encountered something completely unexpected. First it was a small tree stump in the corner. Then it was a giant tap root that ran the entire length of my excavation site. Problems, it seems, come in many shapes and sizes. Each one requires new tools, new strategy, new insight from friends and neighbors, but mostly a lot of sweat, hard work, and trial and error.

After two days, I cleared a patch big enough to plant my diminutive rhubarb. It looks a little lost amidst the barren soil and the remaining lily hedge, but it is a start. As its roots dig deep, I dub my weekend project a success. But I also can’t help reflect on what may be the biggest lesson of all:

What lessons were the root of your most recent success?