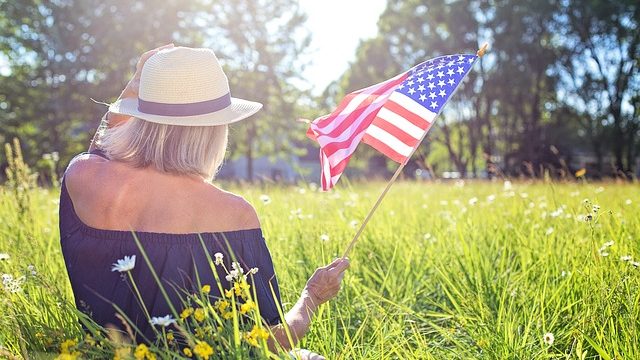 Honor thy rhinestones and workout tights?

Imagine 300 million people decked out in red, white, and blue t-shirts and baseball caps with sparkly rhinestone flags. Whether they live in a Manhattan high-rise or the Alabama countryside, some things are universal. USA Patriotism soars in summer—but what about the rest of the year? Do we care about honor, God, or our country? I love the fact that the United States is a melting pot of odd characters, including those who like to exercise their right to wear tacky clothing. These days, all you need is a pair of great workout tights to tie any seasonal look together or hide a multitude of sins. Maybe that’s why people coined the phrase: The land of the free. The only thing is, freedom isn’t free.

Live as people who are free, not using freedom as a cover-up, but living as servants of God.

Over the years, hundreds of thousands of brave souls proved liberty can cost everything—including their lives. Today, the reminder of previous years battles, wins, loses, and tears keeps our inner radar (AKA intuition) blaring megaphone or bullhorn-ish warnings whenever any military personal comes within twenty-five feet of us: Don’t forget to thank them for their service. After all, the least we can do is honor the ones that sacrificed every part of their being for us to live abundantly in the land of the free.

Their selflessness reminds me of another guy I sort of know. I hope you know Him too.

Greater love has no one than this, that someone lay down his life for his friends.

I’ll never forget one of our family’s most memorable 4th of July barbeques. This happened four years ago when my then six-year-old grandson ran out to our porch and said, “Stormie ate five steaks and then she licked the plate until it slipped all the way off the kitchen counter.” Our Weimaraner enjoyed the fruits of our labor more than we did that day. We ate lots of salad and ordered chicken wings. My husband and sons lit sparklers, firecrackers, and colorful smoke bombs for the kids. However, Stormie went to bed with a tummy ache.

Each year, even the not so patriotic take part in national celebrations. There’s the designated grill master, boat captain, fireworks guy, and picnic-packing gal. I’ve often wondered why charred burgers, homemade potato salad, and fireworks that sound like air raids and bombs exploding are our favorite ways to honor the men and women who served or died for the sake of freedom, I’m thankful to share in the remembrance. After all, freedom and honor go together like cookies and milk or apple pie and coffee. Sacrifice, however, is another story. It’s the stuff many folks don’t talk about or celebrate anymore.

For even the Son of Man came not to be served but to serve, and to give His life as a ransome for many.

If freedom isn’t free, what are we fighting for?

I remember my father’s B-52 tail gunner war stories. His adventures spanned from Guam, Iwo Jima, Okinawa Japan, and the whole Pacific Ocean theatre. He’d howl fighter jet and explosion sounds as if this would make the stories come alive for his little butterfly-loving girl. Although my father’s tales didn’t interest me until many years later when I finally understood the reasons he fought for independence, I listened and learned about sacrifice and heroism. He wasn’t proud of all the bloodshed. I cry whenever I think about the last war story he’d told a week before he died. At seventy-seven, when lung cancer stripped him of his armor, he held God’s hand and let go of the nightmares. The man knew the painful loss of brotherhood when he watched his brothers in arms die. I always pray that the lives he saved and liberated surpassed the lives ended—or the tears we cried. And yet, the question remains today—What are we fighting for?

Uncle Joe’s war stories were different than dad’s. He’d wince while he told how he didn’t want to claim his purple heart medal. His retellings of how he barely survived in a foxhole for three days brought back memories of fear and guilt. But, like my father, he always ended his accounts with the assurance; future independence, joy, and peace made it all worth it.

My mother worked as a seamstress on a parachute assembly line while her future husband and brother-in-law fought overseas. Mom and dad’s love letters are tucked away in my jewelry box.

Although they may have known a deeper meaning of sacrifice than you or I, I’m thankful each played a part in giving us the rights we have today. They knew and believed in a higher calling from God, the giver of life—and the author of the story of ultimate sacrifice through His son, Jesus.

Could the red stripes of our flag have stood for every soldier’s spilled blood? Blood cuts deeper than hardiness and valor. The steep price of freedom hurts. Perhaps the white stripes represented more than purity and innocence too.

I see the red as Jesus’ blood and scars. Unconditional love proved the truth: Freedom isn’t free. He laid down His life as the ultimate sacrifice. Love said we were worth more than you or I can ever imagine. Maybe the white illustrates the hope we have in heaven. And all those stars? Well . . . I hope they represent eternity.

Does summer bring back long lost patriotic memories for your family? What are your thoughts about honor, freedom, God, and our country? I’d love to hear a bit about your story. Please join the conversation in the comments section below this post.

Joann Claypoole is an author, speaker, master stylist/colorist, and former spa-girl entrepreneur. She's a wife, mother of four sons, “Numi” to four grandbabies, doggie-mom of two. The award-winning author of The Gardener’s Helper’s (ages 5-9 MJ Publishing2015) would rather be writing, hiking in the mountains, or inviting deer and other wildlife to stay for dinner near her western NC writing retreat. Visit her website: joannclaypoole.com and WordPress blog: https://joannclaypoole.wordpress.com/