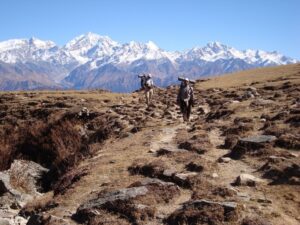 I have often been admonished to “Finish what you start.” The thing is, I’m not a great finisher. I’m a great starter. I have great ideas, and a house full of unfinished projects. 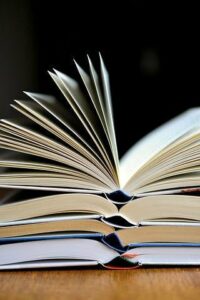 I have bookshelves full of books that I started but abandoned for something more interesting. There’s the paint job I started on my bathroom that was abandoned so long ago that it probably should just be redone. Over the years, I have tried to learn various crafts and hobbies, but seldom stick with a project long enough to master it. I’ve been meaning to start a blog for months. I have the domain, but just can’t come up with a name. And the walking half-marathon that I eagerly signed up for last spring is looming ominously in my future with very little progress past walking two miles in 40 minutes. https://inspireafire.com/finishing-hard/

I had jobs that had established deadlines and told me where to start and how to finish–so I usually managed, though sometimes I struggled. Having ADHD is partly to blame. I wasn’t diagnosed until adulthood, and it’s a real issue, not just a punchline. When I realized my problem, I was able to make a lot of progress. Coaching, support groups, counseling, schedules, and yes, medication, have helped me understand how my mind works and to use my mental energy productively.

John Acuff said, “starting is fun, but the future belongs to finishers.” I’m at a place in my life that I have begun to think about my legacy. That’s when finishing becomes a much more serious matter than a stack of unread books or a half-finished paint job.

It is sobering to realize how few of the characters we find in the Bible finish well. Many of them start strong, but then sputter at the finish line. I am haunted by the story of Hezekiah. He became king over the northern kingdom of Judah. The first years of his reign he led with humility and integrity. He restored true worship to Judah and led the restoration of the temple. When faced with threats of foreign invasion, he didn’t panic. He prayed. And God answered his prayer. The Assyrian army was killed by a plague, and Hezekiah’s army didn’t even have to fight.

When he became ill and was told by Isaiah the prophet that his illness was terminal, he prayed. He reminded God that he had been a godly king. And God rewarded his prayer with a promise of 15 additional years of life. What a gift!! But Hezekiah wasted those precious years. He became arrogant and showed enemy emissaries his wealth. His son and heir, Manasseh, was born during that time. The scripture is silent on Hezekiah’s relationship with Manasseh. We don’t know if he was indulgent with his son or if he placed high expectations on the boy. But we do know that Manasseh was just 12 years old when he became king. He was raised by a father who knew his time was limited. Instead of carrying on his father’s legacy, Manasseh was an evil ruler who led the people into idolatry.

A Life Turned Around

In contrast, the Apostle Paul started out on a sour note. A rising star in Judaism, a member of the Sanhedrin, he spent his young adulthood violently attacking everything Christian. He hated Christians so intently he killed and imprisoned many of them. All that changed when he had a face-to-face encounter with Jesus on his way to torture even more Christians. I guess there’s something about talking to the One you thought was dead that will change your life.

Paul followed Jesus with the same intensity that he had opposed Him. Determined to preach the gospel where no one else had preached, he traveled the Roman Empire, enduring persecution and deprivation everywhere he went. The long days of travel meant that he had time to develop deep relationships with many of his co-workers. Silas. Barnabas. Luke. Timothy. Titus. Priscilla and Aquilla. Their names are recorded in the letters he wrote. Those letters make up over half the New Testament. Paul’s friends and colleagues were the pastors and leaders in the dozens of churches he started.

During his final imprisonment, Paul wrote Timothy, one of his spiritual sons,  a very personal letter. His final words assure Timothy that “I have fought the good fight. I have finished the race. I have remained faithful.” Paul was content that he had finished what he started. He had kept his focus on Jesus. And he looked with confidence to the Crown of Righteousness he knew he would receive.

Focus on the Goal

Being focused on the goal means that some projects will get left by the wayside. I’m sure that God isn’t upset that I gave up gardening. I often forget to water when I should, and the weeds grow faster than my desire to pluck them.https://inspireafire.com/stay-the-course/  Neither is it a great tragedy that I gave up piano lessons as a teenager. The world will get along just fine without ever hearing me play. I only have so many days on this earth, and so much energy to expend. I want to use that time to develop  the gifts God has given me.

Bob Goff  https://www.bobgoff.com/resource_redirect/landing_pages/2148342478 is a popular writer and speaker who understands the importance of choosing the right pursuit. Bob trained as an attorney, and had a successful law practice  when he realized that just because he could practice law didn’t mean that was what he was to do. He turned his attention to people in need and has leveraged his successful writing career to build schools and rescue individuals from trafficking. He wrote this in his most recent book, “A slow drift in a general direction probably isn’t going to get you where you want to go in your life, nor will it get you anywhere quickly. Distractions are not riptides. They are slow moving currents that will lead you away from your ambitions, relationships, and joy–every time.”

I don’t want to stand before God and admit that He equipped me to impact someone’s life and instead I was debating politics on Face Book or watching mindless You Tube videos. A life of purpose doesn’t just happen. It is choice, not chance. I choose to finish strong. 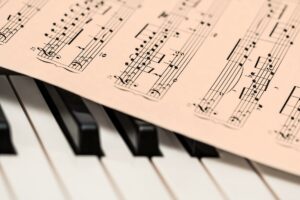 Here are some principles I see in the lives of Paul and Hezekiah.

1. Spend time reading the Bible, daily if possible.  God’s word is a “lamp to our feet and a light to our path. When we read and meditate on the Bible and pray for guidance, He will provide it. Even as Paul faced execution, he asked Timothy to bring him his copies of the Scriptures.
2. Focus on your goal, not the past. Paul could have been paralyzed if he obsessed about his early life. But he refused to live in the past. In Philippians, he says that he continues to press toward the mark of the high calling of God in Christ Jesus. Hezekiah seems to have coasted in his last years. He knew he was “living on borrowed time” so to speak. Instead of seeking God’s guidance, he became prideful and bragged about God’s provision. His enemies eventually used this to their advantage. And his son didn’t learn to follow God.
3. Stay in community. Once Paul’s ministry began in earnest, he always had people with him. He spent time with other believers. Priscilla and Aquila. Barnabas. Timothy. Luke. These are just a few of the believers he taught, and learned from. God created us to live in community, not to be lone rangers.
4. Be teachable. When Hezekiah was reprimanded by Isaiah for showing the wealth of his kingdom to his enemies, his response is puzzling. He doesn’t repent. He accepts the reprimand and takes comfort in the fact that his kingdom wouldn’t fall in his lifetime. Most parents would lament harm they bring on their children. Paul was willing to admit his mistakes. In the last paragraphs of his letter to Timothy, he asks for John Mark. Paul had parted ways with his first ministry partner and good friend Barnabas because he didn’t want to give John Mark a second chance after he bailed out of a mission trip. In the end he wants to see John Mark. Both men had grown and changed. And Paul wanted to spend some time with Mark before his death.
5. Be flexible. The goal will never change. But the task at hand will. When Paul was in prison, he was no longer able to travel and start churches. He shifted his focus to writing letters of encouragement to churches and individuals. And that is perhaps his greatest legacy.

I am recently retired. For 30 years, I had goals established for me by my others. Now I am free to pursue what God has placed in my heart. My tasks have changed. By goal continues to be “that I may know Him.” 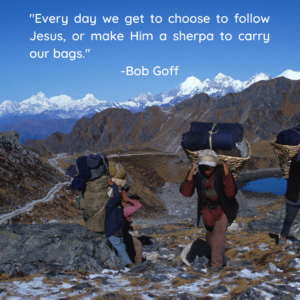 “Every day we get to choose to follow Jesus, or make Him a sherpa to carry our bags.” -Bob Goff

I would rather have Jesus take the lead!