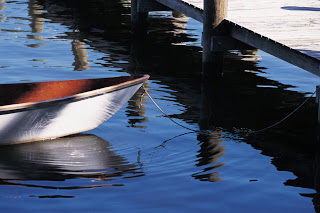 And when he got into the boat, his disciples followed him. And behold, there arose a great storm on the sea, so that the boat was being swamped by the waves; but he was asleep. And they went and woke him, saying, “Save us, Lord; we are perishing.” And he said to them, “Why are you afraid, O you of little faith?” Then he rose and rebuked the winds and the sea, and there was a great calm. And the men marveled, saying, “What sort of man is this, that even winds and sea obey him?” (Matthew 8:23-27 ESV)

I’m big on being out of the boat, but being in the boat isn’t as easy as it’s cracked up to be.
Do you remember the story? In Matthew 8, Jesus has delivered the Sermon on the Mount, healed a bunch of people, and cast out a slew of demons. As the crowd grew around Him, He gave orders to cross to the other side of the Sea of Galilee. He was exhausted and He crashed.

The disciples were probably okay with that.

The storm came. The wind blew. The waves—oh the waves.

We don’t know how much noise they made hoping He would wake up on His own. We don’t know if they argued over who would be the one to disturb Him.

These guys were trying to hold the ship together and at some point, they start calling out, probably all at once to be heard over the wind. “Jesus. Jesus! Hey, Jesus!!! Help! Save us. We are going down, man.” (Lynn’s paraphrase)

Now, let’s give the disciples a little credit here. Somewhere, there was a smidgen of faith. They’d been watching Him do amazing things. And they asked Him to intervene on their behalf.

Maybe they wondered if His power extended to the weather. Sure, He could handle demons. He could heal people. But freak storms? That might be too much.

We know better. But then, we have the whole Bible and know how the story ends. It’s easy to sit in our comfortable pew and tsk-tsk the disciples for their lack of faith.

Until my faith runs into a storm it hasn’t faced before. And suddenly, I start to wonder. Can He handle this? Maybe this is the relationship, the job, the financial problem, the heart, the illness, or the fear that might be too much.

But I’ve seen Him do amazing things. So I take my smidgen of faith and I cry out, “Lord, save me! I’m dying here.”

And once again, He says, “Why are you afraid?”

I’m so thankful He doesn’t keep me at arm’s length because of my pitiful faith. If I let Him, He pulls me close into His Everlasting Arms and holds me until the storm is over.

Did you follow Jesus into the boat and now find yourself in the middle of a storm? The storm doesn’t mean you’ve messed up. And you don’t have to hang on in your own strength to get through.

Crawl into His arms. Stay there. Let Him hold you.

And get ready to marvel.

Sweet Jesus, Thank you for always holding us close. Give us the grace to lean into You always.