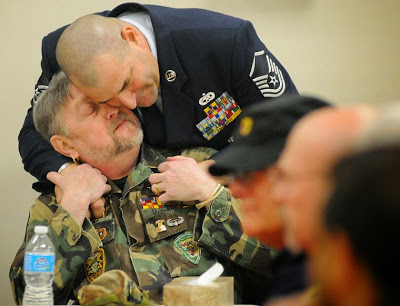 (Many of our nations heroes now linger in hospitals and nursing homes as their once valiant bodies become frail with age. This 4th of July weekend, if you see a veteran …any veteran,  realize that they may be silently asking you, “Did you notice?”)

His body and mind bear the scars of the two wars he volunteered to serve in. He fought proudly and bravely to defend America’s freedom. A freedom he wholeheartedly believed was worth risking his life for. A freedom he believed would preserve the American Dream. A freedom he thought everybody appreciated.
But now he lay alone in a barren hospital room weakened from the disease that will claim his life, and shaking from the debilitating PTSD he has coped with since his second tour of duty.

“Does anyone even care anymore?”
The silence between us looms as I struggle for an appropriate response.

Of course his service and sacrifice mattered…

…but how do I convince him? This is not a time for pat slogans or insincere platitudes.

He responds with a faint smile, and shows me the only personal item in the entire room. His hat that proudly says, VETERAN OF TWO WARS…

In my work in hospice I have sat with many such soldiers that are coming to terms with the fact that their life is ending. Some are stoic and never verbalize their disappointments. Others seem capable of only expressing anger. But this man is different. There is no bitterness in his voice. No anger. Just a sad gentle despair.
He had taken the flag to the hill. He had given all. He had held the front line. He had carried the wounded and dead while the Vietcong lurked in the shadows. And Now, in the twilight of life, with his soul on a fast-track to eternity, he wonders if anyone even noticed.

DID YOU NOTICE that when you got in your car for your trip this weekend that you didn’t have to contend with checkpoints, provide papers, or pledge allegiance to a god you didn’t believe in before being allowed to cross the state line?

DID YOU NOTICE that when you went to the church of your choice that you could do so publicly and openly without persecution?

DID YOU NOTICE that when you posted whatever you wanted on your favorite social media website that there weren’t policeman at your door threatening to kill you for what you just said?

He had fought as hard as he could for as long as he could to do what he believed was honorable and right. To train other soldiers. To protect the innocent.

But now he is too weak to fight, no longer able to stand at attention, and although he has many medals, all he really wants to know is … Did You Notice?