It wasn’t the dinner-with-family I had envisioned.

I should have been there by early afternoon, but after a series of delays, cancellations, and re-bookings, I found myself with an extra seven hours at the Charlotte airport.

Seven hours is a long layover.

Fortunately, there were two pieces of good news. First, I could still get out that night, so my long-weekend was still intact. Second, I’m a writer. Writers know exactly what to do in situations like this.

We go looking for something interesting to write.

My first stop was a model airplane mobile circulating above a sushi bar. I had already walked by this spot several times, but I never noticed it until I started looking. The slowly moving aircraft were mesmerizing, and all different. People rushed en route to their gates, but I stood so long staring over the heads of the diners that one lady finally got agitated and left. I took her seat.

After this I strolled through a line of fake trees. It wasn’t exactly Sherwood Forest, but with a bit of imagination and the cute little directional signs I could almost pretend I was in a quaint English village. Almost. 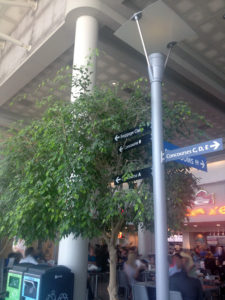 One entire terminal was open during construction. They weren’t kidding about the construction. Exposed wires, cardboard floors… I didn’t stay down there very long for fear that I might plummet onto the tarmac. But I did stay long enough to snap a picture of this exposed ductwork that I thought looked a bit like a silver saguaro cactus. Don’t you agree? 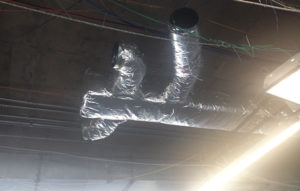 Throughout the Charlotte Airport are these fantastic seating areas filled not with the traditional bolted down airport seats, but with sparkling white rocking chairs. (You’ve got to love southern hospitality.) No matter which terminal I went to, these special rocking chairs were almost always filled to capacity, but one advantage of a 7-hour layover is you can outwait almost every other passenger. I did eventually get my turn to rock. Twice. And it was quite nice. 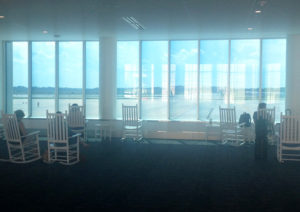 Down what I dubbed the digital terminal, there was a fascinating display screen that constantly morphed into different colors and shapes. I stood amongst shrieking children pointing and exclaiming at the wall. I’m pretty sure more of the nearby adults would have joined in our jubilant awe, but they must not have had a long enough layover to shake off their layers of self-consciousness.

The nearby sign explained that this wall visually represented all the data flowing through Charlotte International Airport at that very moment. Something in my brain does not allow me to understand how data punched into a computer morphs into something visually cool, but that’s okay. I decided to spend my time enjoying it rather than figuring it out. 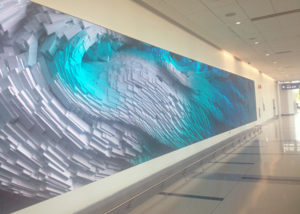 From there I wandered down countless more corridors, jumped on and off moving sidewalks, and ran up and down some stairs just for fun. I danced to oldies music outside a burger place and mariachi outside a Mexican cantina. I enjoyed some Carolina Pit BBQ with collard greens because it seemed like the thing to do. And then just like that, it was time to head to my gate and fly away.

Perhaps this summer you’re also finding yourself someplace other than your intended destination. Maybe family vacation plans got rerouted, or maybe life threw you a curveball. Let me encourage you to take the time to explore where you are. Don’t compare it to where you’d rather be – of course it won’t measure up – but you might be surprised how God shows you some interesting things right here until He is ready to move you on to your  next destination.