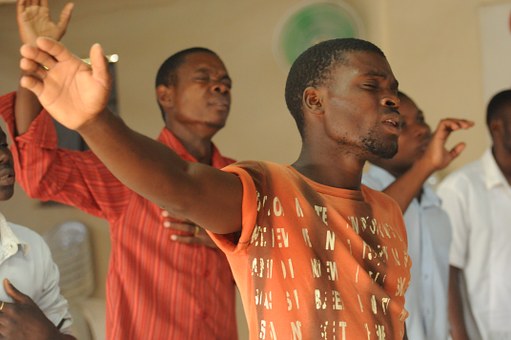 After driving up and down restaurant lane for hours with the whole family in tow my mother finally capitulated that it would be all right to try an ethnic cuisine with the caveat, “You can take me in there, but you can’t make me eat.”  An American German Catholic to the core of her apple sauce she was not what today we would call multi-cultural. A waitress for twenty nine years at the same restaurant in Wisconsin she eventually warmed, or at least thawed toward the wait staff in New Mexico when our waitress suggested the cook could make her a hamburger instead of a taco. We kids rolled our eyes and wondered when if ever she would ‘get with the times.’

The current political climate in the United States might suggest that she was ahead of her time as the backlash against immigrant cultures dominates our headlines and legislatures. The Christian community, if such a broad concept still holds any weight, is smack dab in the middle of the great divide. Some churches offer sanctuary in the face of deportation, some ostracize the slightest deviance of a mythical Puritan norm.

When John’s disciples asked Jesus if He was the Messiah (Matthew chapter 11) He told them to go back and report, “the blind see, the lame walk, the lepers are cured, the deaf hear, the dead are raised to life, and the Good News is preached to the poor.”  I find it telling that being considerate of the poor is on an equal footing with raising the dead as a proof of Christ’s miraculous mission. He further emphasized this sense of caring and compassion by stating, “if you give even a cup of cold water to the least of these, you will surely be rewarded.” Apparently this was not meant to be a mere suggestion as He stipulates, “If you refuse, to take up your cross, and follow me, you are not worthy of being mine.”

The worthiness of a human being from a culture other than the one we are raised in, is not for us to decide or even debate. The cultural differences, are just that. Not everyone appreciates jalapenos, and a culture that dehumanizes daughters for example, is not to be glossed over with a bland sort of different strokes for different folks philosophy, but the point of connection, the cross over, is where we find ourselves equal in Our Father’s eyes.

What would it take for each of to walk a mile in somebody else’s shoes? Maybe the first step in our journey, like the Good Samaritan’s, is to recognize the injury of prejudice and the wounds of racial intolerance. We are privileged to be ambassadors of Christ, the responsibility that comes with it is mindful kindness. The reward is a seat at the Banquet, next to your neighbor, and the Son of Man, the Prince of Peace, and my Mom.