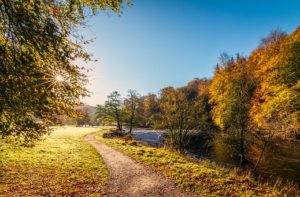 And she will have a son, and you are to name him Jesus, for he will save his people from their sins.” Matthew 1:21 NLT

God sometimes shows up in the strangest ways. One Christmas week in 1980, he did just that, and it was a Christmas my family never forgot.

For a number of years, Dad struggled with God’s call to be a full-time evangelist. After resigning from his church in Orangeburg, South Carolina, he decided it was time. But it wasn’t God’s time, only Dad’s. So God allowed him, my mom, and my two younger brothers to spend a Christmas on the Santee River to convince him.

Leaving a church when you live in a church provided home and have nowhere to go is a scary experience—especially when you have a family to support. Fortunately, the church organist had a little getaway mobile home on the shores of the Santee River. Completely furnished, it was ready to move in.

My family loaded up their clothes, stored the remainder of their belongings at my grandparent’s home, and headed for what they had never experienced before: living in a trailer, using someone else’s belongings, and living on the water. Their new home was small, cramped, and showed evidence of a bachelor’s presence, but Mom made it as much of a temporary home as she could—even after finding snake skins in one of the closets.

Mom was employed in Orangeburg, thirty miles away. Her income wasn’t sufficient to pay bills. Debt was mounting. Calls for Dad to preach were few and far between. When they came, Mom struggled to muster the gas money for Dad to get there. Compensation was never enough to cover his expenses. 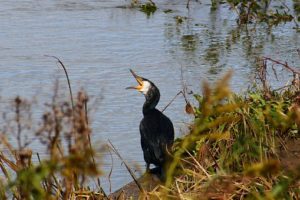 The weather had turned cold, and keeping the oil tank filled further drained their bank account. To top it off, my middle brother struggled with asthma attacks. Dad took long walks with him in the woods and along the riverbank, hoping to calm him down so they could avoid a trip to the hospital—another unaffordable expense.

All the while, the season of joy quickly approached, but there didn’t appear to be much joy in the household that Christmas. How could they be joyful when there was no money to buy a tree or presents? Even if they had the tree, their ornaments were packed up who knew where. Mom loved to cook large Christmas meals, but this year the cabinets were bare. Meat rapidly became a scarce commodity. Times, in fact, were so lean they couldn’t afford the gas to return to church services on Sunday evenings.

A dose of ingenious planning by Mom and a surprise visit from a friend turned the tide. Low County South Carolina is heavily dotted with pine trees. Why not use one as a Christmas tree, Mom thought? So they did. Dad and my two brothers trekked through the woods until they found the perfect one. They cut it and dragged it back to the spot Mom had carefully chosen in the trailer. She even came up with a solution for the ornaments. Finding craft ornaments that required baking and painting, she accosted them and delivered them to Dad. He needed something to occupy his mind anyway. But the cabinets were still bare.

Christmas looked as if it would be meatless that year. But during Christmas week, their good friend and owner of the trailer, stopped by. He worked at a local car dealership and had been given a ham and turkey as Christmas gifts. Since he was a single man, he had no use for both and wondered whether Mom, Dad, and the boys might be interested in having the ham. They snatched it up with great joy and appreciation. God sent meat for Christmas.

This Christmas on the river was probably the leanest my family had ever experienced, but of the many they have shared together, it stands out as their most memorable. They spent time together and felt closer than they ever had. The aroma of the ham cooking snaked through every inch of the trailer, reminding them of God’s goodness. They didn’t have much, but God gave exactly what they needed. 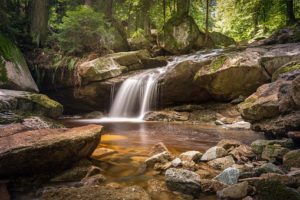 Mary experienced the same. She was a poor young woman engaged to be married when God showed up and told her she would birth the Savior of the world. The excitement—and anxiety—was almost more than she could bear. But her willingness to accept God’s plan resulted in salvation for all who call upon the name of the Son she bore.

My family needed meat for Christmas, and God provided. Soon after, He provided another church for Dad to pastor. Once again, they had a place to stay and food on the table. God provided sustenance for my family just as He did a Savior for the world. And that’s how God is. Whatever the need, He’ll always supply.